I posted this item two years ago, but today seems a good time to revisit it:

This comes from an interview in the Clarion Herald with New Orlean’s Archbishop Gregory Aymond in 2017:

Amy Coney Barrett is a law professor at the University of Notre Dame. She is the eldest of seven children of Deacon Mike Coney, who is a permanent deacon assigned to St. Catherine of Siena Parish in Metairie, and his wife Linda. Amy attended St. Catherine of Siena School and graduated from St. Mary’s Dominican High School in 1990.

She went to Rhodes College in Memphis and majored in English and minored in French before deciding she wanted a career that would allow her to establish roots and raise a family. So, she decided to go to law school, which followed in the footsteps of her father, who is an attorney. Deacon Mike was telling me recently after Mass at St. Louis Cathedral how proud he and Linda are of their daughter. Amy is married to Jesse Barrett, who is an assistant U.S. attorney for the Northern District of Indiana. The Barretts have seven children themselves – five are their biological children and two are children they adopted from Haiti. Their youngest biological child has special needs. What an incredible family!

Sen. Feinstein questioned Amy about the upholding of Roe v. Wade, the 1973 Supreme Court ruling that made abortion legal.

The senator said this: “When you read your speeches, the conclusion one draws is that the dogma lives loudly within you. And – that’s of concern when you come to big issues that large numbers of people have fought for for years in this country.” That line of questioning was contrary to the U.S. Constitution, which protects the free exercise of one’s faith and rejects religious tests for public office. I was very proud that Amy was able to answer those questions about her faith honestly. At one point, when she was asked by Sen. Dick Durbin if she considered herself an “orthodox” Catholic, Amy replied: “If you’re asking whether I take my faith seriously and am a faithful Catholic, I am. Although I would stress that my present church affiliation or my religious beliefs would not bear in the discharge of my duties as a judge.” She made it clear she would “follow unflinchingly” all legal precedent, and in the rare cases where her conscience wouldn’t let her do so, she could recuse herself. She is a woman of integrity.

The questions she was asked regarding her faith were not in accord with the Constitution. A person who is a candidate for the federal judiciary has a right to hold any religious belief. This is another example of the government trying to tell us what we should or should not believe. If her position on these issues had been in agreement with the senators, perhaps those questions would not have been asked. In the end, how can you separate your faith from what you do and how you live your life? To say one’s beliefs would not influence one’s decision-making process is illogical. However, Amy did say she would follow legal precedent and recuse herself if her religious beliefs did not allow her to do so. The government can’t tell us not to use our faith.

Become a Patron!
Update: here’s something written by Amy Coney Barrett’s father for his parish website: 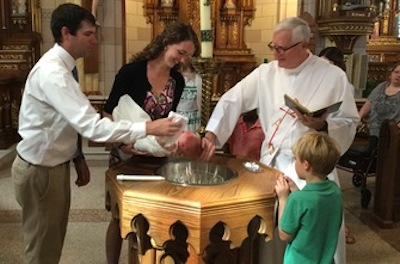 Most of my legal career was spent as an attorney with Shell in New Orleans. But early in my career I was promoted and transferred to Shell’s main office in Houston. From a career perspective it was fantastic. The salary increase and the potential for further management promotions were a dream. There was one problem. By then we had 6 children, one a baby. After jointly discerning what was best for our family and after securing another job, I resigned. Our discernment had told us that money and success were not as important as what was best for our family. Later Shell rehired me with the promotion and a promise to keep me in New Orleans.

Diaconate has spanned 36 years of our almost 49 years of marriage. Our call (I firmly believe it is a call to both husband and wife) came through the Charismatic Renewal. Like many people and most guys, I saw very little to like in Charismatics. I dodged it until I was trapped into attending a Life in the Spirit Seminar. When prayed with for a greater outpouring of the Holy Spirit, nothing happened. Then later that night I began to speak in tongues. More importantly, I was filled with an insatiable appetite for reading scripture and spiritual books. Making time for personal prayer became important. I sensed a call from the Lord to serve. Linda surprised me by asking me if her sense that the Lord was calling me to be a deacon was correct. We jointly discerned that I should apply and the application was completed right before the application process closed. We had two children when applying, two during formation, and three after ordination. Juggling life as husband, father, attorney and deacon has made me depend much on the Holy Spirit. My continual prayer is a short one: “Give me wisdom, knowledge, discernment and sound judgement.” Very often the Lord has made 5 or 6 hours of sleep feel like 8. Early on I made a deal with the Lord about preaching preparation, which, for the most part, remains true. At first preparing a homily took most of Saturday. That was unfair to my family, so I asked the Lord to help me get it done in about an hour. He has honored that request.

After ordination we felt a call to live life in a close knit Christian community, one like that described in the Acts of the Apostles, one that would help form our children into good Christians and strengthen our marriage and family. As a result, our family became members of an ecumenical lay covenant community called the People of Praise (POP). The glue which binds the members of the POP is a promise to share life together and to look out for each other in all things material and spiritual. Men and women separately meet weekly in small faith groups. In this ecumenical community my faith has been nourished and my commitment to my friend Christ has grown deeper and stronger and has borne good fruit.

As I wrote this it dawned on me how generous our Lord has been. This scripture from Deuteronomy sums up how I feel. “Do you not know that the Lord your God has carried you as a Father carries his child all along your journey?”