We’re all in this together: Homily for September 27, 2020, 26th Sunday in Ordinary Time

Earlier this month, Lane Unhjem was working the fields of his farm in North Dakota.

He was driving a combine, harvesting his crops. But in the middle of an otherwise ordinary workday, something went wrong. Smoke began billowing out of the machine. It quickly caught fire. Lane jumped out and started trying to put out the blaze. Some neighbors saw the smoke and flames and ran across the field to help.

In the middle of the fire and confusion, Lane Unhjem took a breath, inhaled a gust of smoke, and went into cardiac arrest.

The neighbors frantically called for help. A helicopter arrived. Lane was airlifted to a hospital about 100 miles from his farm. But moments after he arrived in the ER, he flatlined — not once, but three times. Eventually, he stabilized.

But the most dramatic part of the story was still to come. What happened next made headlines around the world.

A couple days after the accident, a caravan of farm equipment was spotted heading for Lane Unhjem’s farm. Nearly 60 farmers, some from 30 miles away, rolled into the fields. They brought their own equipment: 11 combine harvesters, six grain carts and 15 semi-trucks.

They were there for just one reason: they wanted to finish what Lane had begun.

Doctors were working to save Lane’s life. These farmers wanted to save his crops.

Every one of them had stopped working on their own farms and interrupted their harvest for a neighbor in need.

One farmer said: “That’s the way it is here. Any time anybody needs a helping hand, everybody will stop what they’re doing at the drop of a hat and come help.”

A few moments ago, we heard what a tentmaker from Tarsus wrote to the early Christians. “Do nothing out of selfishness,” St. Paul told the Philippians.

The good people of North Dakota get that.

In a time when so much of our world is polarized, divided…when so many are angry about the election, about racism, about the pandemic…at a moment when so much is uncertain or even frightening…here is something certain: an act of generosity and hope.

Attention must be paid.

Over the last six months, we’ve heard it again and again: “We’re all in this together.” Yes, we are. So we put on masks and wear gloves and wash our hands and stand six feet apart. We order online and get takeout or eat in the middle of the street and wait for things to change.

But it’s more than that. A lot more.

Maybe we needed this reminder.

In the plains of North Dakota this month, we are taught again this simple truth: We do not live our lives in isolation.

“Complete my joy by being of the same mind, with the same love,” Paul wrote, “united in heart, thinking one thing. Do nothing out of selfishness or out of vainglory; rather, humbly regard others as more important than yourselves, each looking out not for his own interests, but also for those of others.”

This is the Christian life writ large — a life of service, of sacrifice, of humility modeled on Christ himself, who despite being the Son of God, “took the form of a slave.”

We’re all in this together, this world of suffering and sacrifice and scars.

But it is a world that can only be tamed by love.

In Matthew’s Gospel this morning, we heard a parable about the father asking his two sons to work in the vineyard. One did, the other didn’t.

To us today, here and now, God is asking us, his sons and daughters, to go into our own vineyards in our own world. Head into the fields. Do what isn’t easy. Harvest for someone who cannot. Gather the crops. Find a need and fill it.

On Friday, Pope Francis spoke by satellite to the General Assembly of the United Nations. He echoed his message from his special Urbi et Orbi in St. Peter’s Square last March.

“The pandemic,” he said, calls us to seize this time of trial as a time of choosing, a time to choose what matters and what passes away, a time to separate what is necessary from what is not. It can represent a concrete opportunity for conversion, for transformation…The pandemic has shown us that we cannot live without one another, or worse still, pitted against one another.”

The vineyard needs workers. Fields are waiting to be harvested — the fields of God’s kingdom, the fields of our neighbors in need.

And a world that needs every Christian, urgently, to make him present.

After those farmers pulled together to save Lane Unhjem’s crops, they posed for a picture: dozens of friends and strangers in a vast field.

The work had been done. What seemed impossible had been made possible.

It’s a picture worth a thousand words — and, frankly I’ve just shared them with you.

That picture is not a snapshot. It’s a homily.

It says: Look at what we can do.

It is St. Paul’s message to our world today.

We are called to be “united in heart,” caring for one another.

The field is vast. The work is hard.

But yes: we’re all in this together. 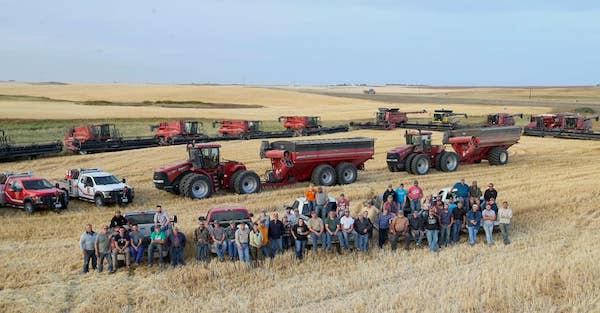