‘Pray for Damar’: the birth of a movement

The collapse of Buffalo Bills player Damar Hamlin has sparked something of a movement, according to Bills team chaplain Len Vanden Bos.  From RNS:

Since Hamlin fell to the turf in Cincinnati Jan. 2, Vanden Bos said he has witnessed a unifying desire for prayer among both players and fans.

… Vanden Bos stood about 20 yards from Hamlin when the play occurred and was soon out on the field with others. People grabbed a hand next to them.

“Some guys were praying. Some were crying. A lot of us were in disbelief,” he said. “We prayed on the field. We prayed in the locker room. We prayed when we got to the hospital.”

Those prayers have a multifaceted effect on all involved, he said.

“God invites us to pray by listening to Him as well as sharing our hearts and requests,” Vanden Bos said. “Prayer’s purpose is to build this relationship and to align us with His will. It’s in this alignment that we grow and learn how to follow Him.”

There has been an openness to prayer among players since leaving Cincinnati. Vanden Bos has encouraged them with a verse from the Book of Hebrews: “Therefore, let us approach the throne of grace with boldness, so that we may receive mercy and find grace to help us in time of need.”

“We had a full team prayer that first day I shared that with them,” he said. “It’s been an opportunity to reach some guys who might not normally come to Bible study or chapel.”

A new addition was made to the weekly Bible study last week when some players decided to gather each morning to pray.

Much was at stake in Sunday’s game against New England. Due to the Cincinnati game’s cancelation, league officials ruled the AFC championship match would be held at a neutral site should it be Kansas City against Buffalo. The Patriots were playing to make the playoffs at all.

On Sunday, medical personnel and athletic trainers were honored alongside first responders for their roles in saving Hamlin’s life. Hamlin’s jersey number, 3, was seen throughout a packed Highmark Stadium. It was also on a 3 Realities card Vanden Bos gave players prior to the game.

That’s not all. A quick Google search of the phrase “Pray for Damar” turns up multiple places selling magnets, tee shirts and gear printed with the phrase. 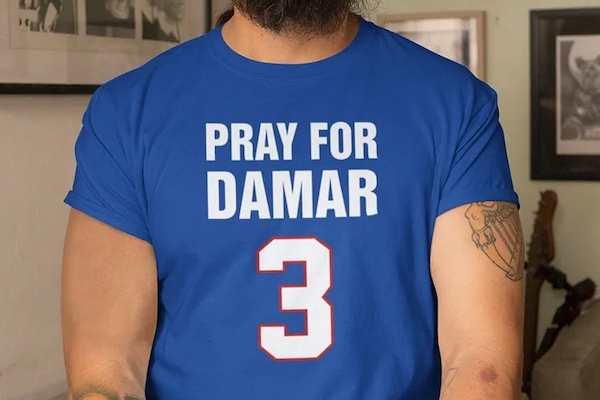 In the days after his collapse, a number of NFL teams were moved to change their Twitter profile picture to show support for Damar: 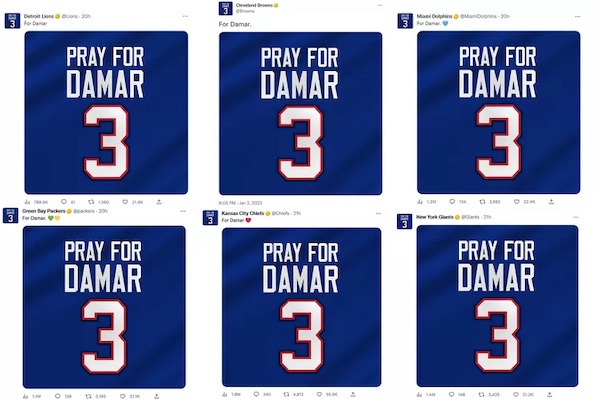 As the NFL community continues to rally around Hamlin, each of the league’s teams set their profile picture on Twitter to a graphic that reads, “Pray for Damar.”

The NHL’s Buffalo Sabres also paid tribute to their hometown teammate ahead their game against the Washington Capitals Tuesday night, with “Love for 3” t-shirts that they wore into the D.C. arena. The Capitals held a moment of silence for Hamlin before puck drop, and the Sabres went on to win 4-3 in overtime.

Hamlin was released from the hospital on Wednesday, to continue his recovery and rehab at home:

The doctors who cared for Hamlin in Cincinnati said in a news conference Monday that recovery from a life-threatening event like the one Hamlin experienced usually takes weeks or months. While his progress has been a little bit ahead of the usual recovery trajectory, they said it was too early to speculate on how far Hamlin is from returning to normal life and that any discussion of whether he could play football again would be “significantly into the future.”