Pope to invite all bishops around the world to join in consecration of Russia, Ukraine

In a letter sent urgently on Mar. 17 to all U.S. bishops, the Apostolic Nuncio to the United States, Archbishop Christophe Pierre, revealed that Pope Francis intends to invite all Catholic bishops and priests around the world to join the Act of Consecration of Russia and Ukraine to the Immaculate Heart of Mary.

The letter, sent by Reverend Michael J.K. Fuller, General Secretary of the United States Conference of Catholic Bishops (USCCB) and signed by Archbishop Pierre, reveals that “(t)he Holy Father intends to invite each Bishop, or equivalent in law, together with his priests, to join in this act of consecration, if possible, at an hour corresponding to 5:00 pm Rome time.”

“In the coming days,” adds the letter, “the Holy Father will address a letter of invitation to the Bishops, enclosing the text of the Prayer of Consecration in the various languages.”

The full letter is below. 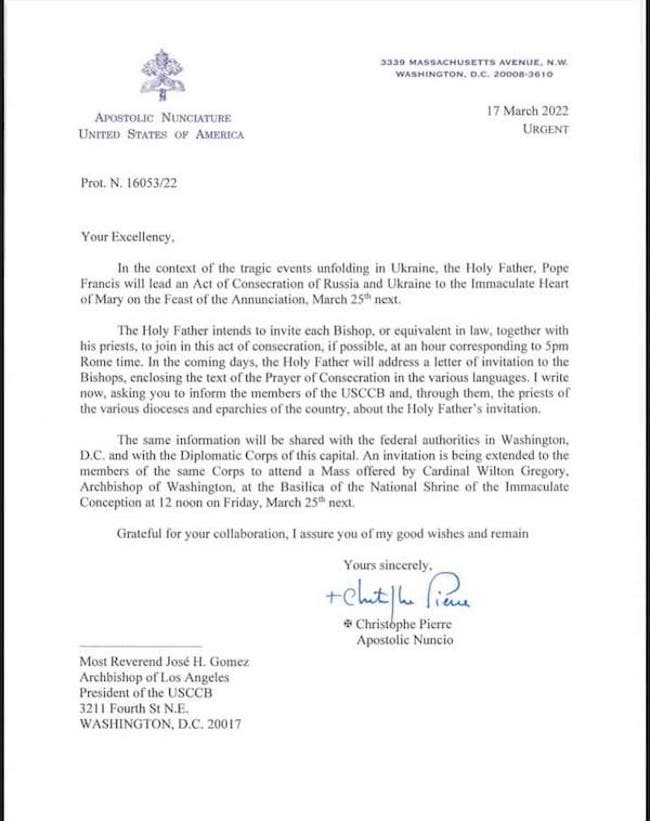