‘Let us be light’

Tuesday night, I paid a visit to the Queens Borough Hall in Kew Gardens, just down the road from my parish, to deliver the closing prayer/benediction at the induction of a new justice to the Queens County Supreme Court.

David J. Kirschner was sworn in before a crowd of family and friends in the hall’s atrium. 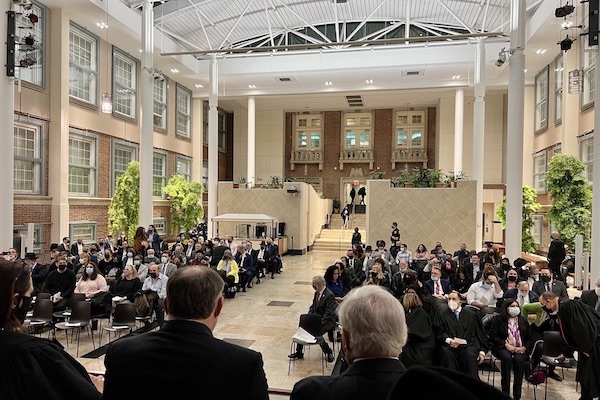 A longtime friend of the judge, Rabbi Herschel Welcher, delivered the opening invocation, with a stirring call to justice. 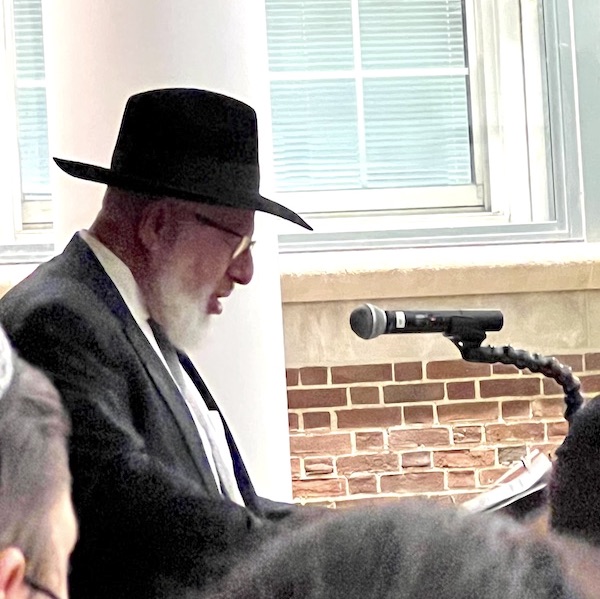 That was followed by a number of brief speeches and messages from friends, family and colleagues. Judge George Grasso, Administrative Judge for Judicial Matters in the Queens County Supreme Court, administered the oath of office. 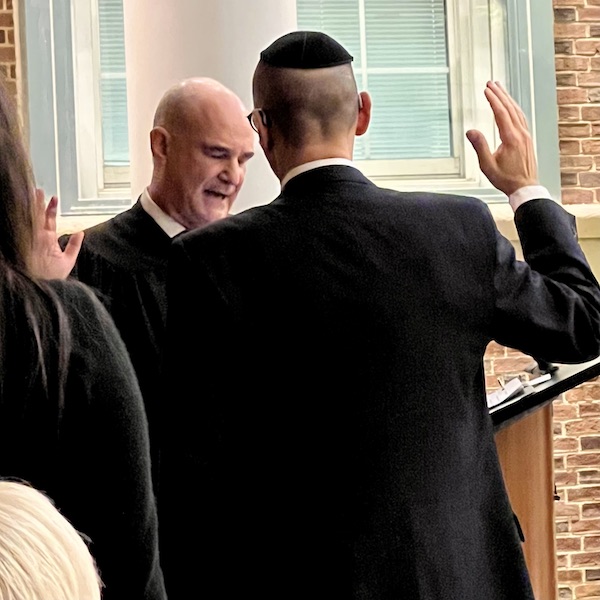 After then being vested in his robes, Judge Kirschner spoke gratefully of all the many people who helped him reach this moment. 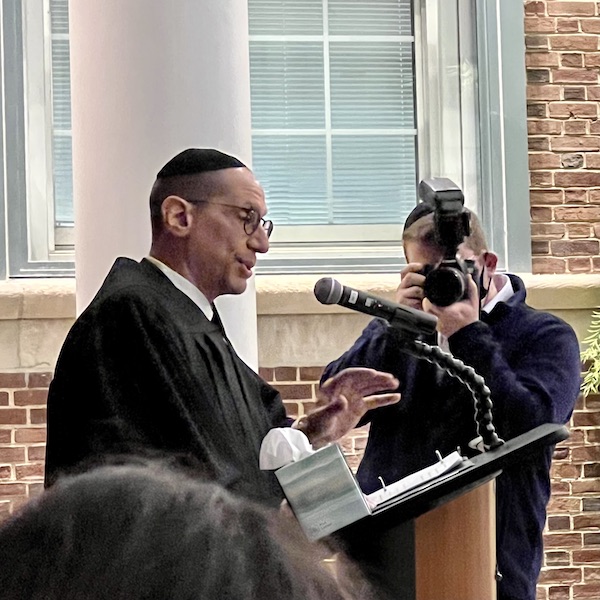 I closed the ceremony with remarks, and a short prayer:

One of the great poets of Queens once wrote, in a very different context, “these are the days of miracles and wonders.” Paul Simon wasn’t talking about the miracle and wonder of someone becoming a judge. But I think it fits the season so many of us are celebrating right now.

I can’t help but notice that we are gathered here in a space, this beautiful atrium, which during the day is flooded with light. And I’m reminded: this is a season of light. We light candles. We share gifts. We try to illuminate the darkest time of the year and we recall, each in our own way, miracles and wonders. The miracle of a light that never dims. The wonder of a Creator God whose love never fails.

With that in mind, I’d like to ask the blessing of The One who created it all.

Your first recorded words in Genesis tell us: “Let there be light.”

And so, we come before you this evening and ask you to help us be your light.

Make us instruments of your peace — and beacons of your love.

We pray for your servant David and ask you to bestow your blessing upon him:

May he offer the light of wisdom and justice to a world too often darkened by cruelty and hate.

We pray for his family, his friends and colleagues, those who serve by his side.

When the days are long and the nights are cold, may those who love him help him know he is not alone.

And may he know always the consolation and comfort of your presence in his life.

We pray for our community of Queens, in this small corner of your vast world.

Shine the light of your love on all in need.

And let us be light to those so often left in darkness.

Let us be light!

Let us be light — to help those who are outcast, forgotten, marginalized, overlooked.

Let us be light — so we may reach through the darkness to hold the hands of those who feel alone or lost.

Let us be light — so that we may see more clearly those we don’t understand and, in seeing, may we set about building … erecting bridges of understanding and solidarity and tolerance and hope.

Let us be light!

Let us be light — to help all who are suffering from the viruses of our world.

The virus of illness, yes.

But also the virus of bigotry.

The virus of indifference.

The virus of cynicism.

Help us, please God, to be healed, and to be healers. And help us to know hope.

And may we never fail to fulfill your first great command at the dawn of time:

Let there be light.

We humbly ask you to walk with us, to dwell with us, and to help us make it so. 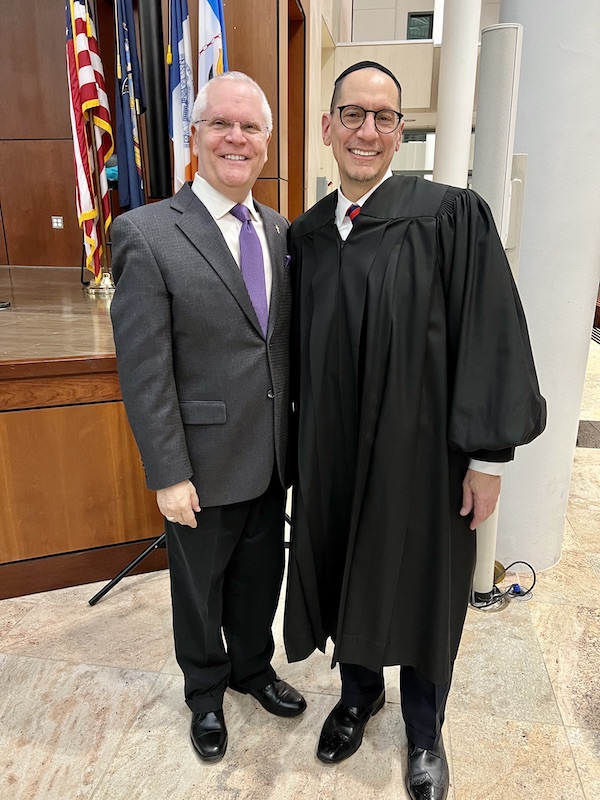 It was a privilege to be a part of this event — and one I didn’t expect.

It all started when another judge, Nestor Diaz wrote this email to my pastor:

I am a Lector at the American Martyrs Church, Bayside. I was blessed to have been elected Judge last year to Civil Court  in Queens County. A colleague was just elected to Queens Supreme Court this year and asked me to find someone to do the benediction at his swearing-in ceremony …

My pastor forwarded the email and said, “Is this something you would want to do?”

And that’s how I found myself on the stage Tuesday night.

As I told the crowd in a preface to my remarks, “I’m the wild card here tonight. Unlike everyone else here, I don’t know Judge Kirschner personally. But my presence here speaks to the kind of person he is: one who cherishes the beautiful diversity of Queens.”

Judge Kirschner previously served as Principal Law Clerk to two New York State Supreme Court Justices from 2007 until his appointment to the bench in June 2016. In 2008, he was elected director of the Association of Law Secretaries to Justices of the Supreme and Surrogate Courts, on which he served until June 2016. In 2018, he was elected to the Brandeis Law Association’s Board of Directors.

Prior to serving as a law clerk, Judge Kirschner was a senior assistant district attorney in New York City where he prosecuted white-collar crimes including racketeering, enterprise corruption, extortion, usury, gambling, fraud and public corruption, and supervised the arrest, intake and arraignment process. While specializing in the direction of covert investigations and electronic surveillance, he successfully litigated and tried numerous cases, several of which significantly impacted legal precedent. Judge Kirschner also writes and speaks extensively on issues of criminal law and procedure for the bench and bar including search and seizure, electronic surveillance and bail reform.

Academically, Judge Kirschner is an Adjunct Assistant Professor of Law with the City University of New York at Queens College and Touro College. He has also taught trial advocacy at Hofstra Law School’s National Institute for Trial Advocacy, and Cardozo Law School’s Intensive Trial Advocacy Program. Currently, he serves as director of the high school mock trial program at the Hebrew Academy of the Five Towns in Nassau County, previously served in that capacity at Mesivta Ateres Yaakov from 2011 – 2015 and has served as a judge in the New York Statewide High School Mock Trial Tournament.

Communally, Judge Kirschner is a director of the Alpha Epsilon Pi International fraternity, previously serving as regional director from 2015-2018, and president of the Jewish Community Baseball League of Queens and Long Island. Prior to his appointment, he also served as director of the Queens Jewish Community Council, the Kew Gardens Hills Youth Center and the Queens District Attorney’s Jewish Advisory Council.

Judge Kirschner earned his Juris Doctor from Hofstra University (1989), where he served as Managing Editor of the Property Law Journal, and Bachelor of Science with Honors from Florida State University (1985).