‘The Holy Fiancée’: Sandra Sabattini is now a blessed — and her former fiancé is a deacon

The Church’s newest blessed was the fiance of a young man who is now a married deacon in Italy.

Her story, from CNA:

The Catholic Church’s newest blessed is Sandra Sabattini, a 22-year-old woman who devoted herself to helping the poor and disabled before she was killed by a passing car in 1984.

She was beatified on Oct. 24 in the Cathedral of Rimini in northern Italy.

Originally planned for June 2020, the postponed beatification Mass was celebrated by Cardinal Marcello Semeraro, the prefect of the Congregation for the Causes of the Saints.

Sabattini’s holiness consisted of “opening herself up to sharing with the least, placing her whole young earthly existence at the service of God, made up of enthusiasm, simplicity, and great faith,” Semeraro said during the Mass.

The young woman “gave those who needed it hospitality without judgment, because she wanted to communicate the love of the Lord,” he added.

The young medical student had just stepped out of a vehicle on her way to a meeting of the Pope John XXIII Community when she and a friend were hit by a car. She was rushed to a hospital where she spent three days in a coma before dying on May 2, 1984.

“Realize, Sandra!” the entry continued. “It is all a gift on which the ‘Giver’ can intervene when and how he wants. Take care of the gift given to you, make it more beautiful and full for when the time comes.”

… At 17, she met Guido Rossi, and the two started dating the year after. For their first date, Sabattini brought Rossi to a cemetery, so they could visit the graves of people who had been forgotten.

They attended the John XXIII Community’s youth group together. Four years into their relationship, Sabattini wrote that dating was “something integral with vocation.”

“What I experience of availability and love towards others is what I also experience for Guido, they are two things interpenetrated, at the same level, although with some differences,” she wrote in her diary.

Deacon Guido was interviewed about the newest blessed:

In 1984, Guido Rossi was engaged to Sandra Sabattini, when a traffic accident ended the life of the woman who this Sunday was raised to the altar as the first blessed bride of the Catholic Church.

Sandra and Guido met in 1979. Some time later, committed to getting married and with the dream of going to Africa to help the “last of the last”, she was killed by a car in a traffic accident. 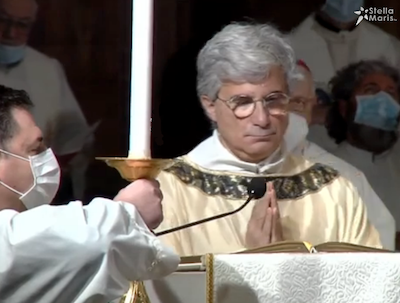 On the eve of his beatification on Sunday, Rossi spoke to Vatican News information service in Italian about his life experience with Sandra and how he was affected by losing her when she was just 22 years old.

“My life was marked by Sandra, with her life and her death….”  said Guido, who is now a married deacon and has two children.

In his opinion, Sandra’s beatification allows us to contemplate “the great mercy of the Lord who never leaves us alone, even when we believe that we are walking alone, while He leads us by the arm, as we saw written on the door of a church in Gubbio that I visited with Sandra.”