Something else for deacons to do this Christmas …

Notice the angel’s stole? You see that a lot in ancient art (but you see it less often in cartoons!)

You’ll even see angels depicted wearing a dalmatic, like this 17th century carving at Kings College (photographed by the ever-present Fr. Lawrence OP!) 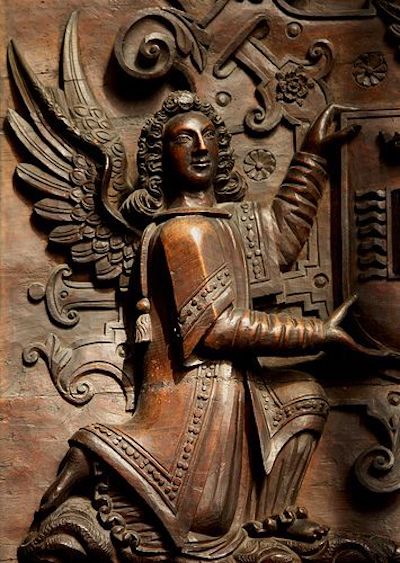 Since we are drawing closer to the time when angels will be appearing more and more on our lawns, greeting cards and, perhaps, local pageants, this seems a good time to recall our diaconal connection to them.

As my friend Bill Ditewig wrote a few years ago, on the subject of angels and deacons:

The so-called “deacon doors” or “angel doors” in the Eastern iconostasis have images of deacon saints or angels on them.  The saintly deacons (such as Stephen, for example) will be depicted in deacon vesture but also with the wings of the angel; angels will be vested as deacons as well.  I would also stress something else.  In almost all of the images I have found from the Eastern tradition, you will notice that the deacon stole is being worn as the deacon wears it for the distribution of communion; in the Eastern tradition the deacon rearranges his stole across his chest before communion, and restores it to its original configuration afterward.  There is a strong Eucharistic symbolism involved in the depiction of the angelic role of the deacon.

The angelic ministry of the deacon is no stranger in the Latin tradition either.  As I mentioned in my earlier posting, Western medieval art often depicted angels wearing the dalmatic of the deacon, even when the Latin Church had largely lost sight of the deacon in regular ministry.  Bishop Roberto Octavio Gonzales Nieves, OFM of San Juan has written:

“The Diaconate is re-instituted at this time in history. . . to act today as a herald: the angel of Evangelismos. . . . In ancient times deacons were sent by bishops with important communications to other churches; also in Eastern liturgies, the stole is seen as the deacon’s angelic wings, and in Western art many angels appear wearing dalmatics.

“Today we can see the deacon as “the new Gabriel who proclaims” – for us – the good news of salvation. Today the restored diaconate says, ‘The Holy Spirit will come upon you, and the power of the Most High will overshadow you’ [Lk 1:35].”

There is so much more we could share here.  My point in doing this research, however, was this.  We deacons often look for good models in our diaconal ministry.  We turn to Stephen, Lawrence, and Francis of Assisi as our deacon “heroes” and models.  I’m suggesting that we should add to our pantheon the angels who have served throughout our Tradition: angels such as Raphael, who heals, guides and protects; Michael, who defends and advocates for the people; Gabriel, who proclaims, teaches, and guards.

We are called to be “angelic ministers”: