NFL star’s goal: ‘Our primary mission has always been to be a walking billboard for Christ’

We need more of this.

When it comes to their private and personal lives, Saints’ Linebacker Demario Davis and his wife, Tamela, have one mission.

“Our primary mission has always been to be a walking billboard for Christ, so that others may be able to see and encounter Him through us and our experiences,” Tamela Davis told The Christian Post.

“No matter where we are, no matter who we’re speaking to, we can’t compromise who we are. We know Who we belong to. We want to make sure that we’re always being a good representation of who Christ is and that we’re able to invest and share all of our life experience in a way that reflects Him.”

According to his wife, Demario, who’s in his ninth season with the NFL, strives to demonstrate biblical manhood both on and off the field.

“Demario is all about the importance of men stepping up and leading in their homes and in their communities, and in their work environments,” she said. “He’s so intentional about spending time in the Word and faithful in how he spends time with God. He’s so reliant on God in every facet of life. He daily goes before the throne, asking God to reveal to him his flaws and strengthen him for the sake of the Gospel.”

Part of the couple’s commitment to sharing the Gospel is highlighting the fact that living a Christian life doesn’t guarantee freedom from pain.

“We want to be honest about what it means to follow Jesus,” Tamela said. “It doesn’t mean it’s going to be roses all the time.”

Read on to see what that means.

N.B.: His public witness has not been without controversy. From 2019:

New Orleans Saints linebacker Demario Davis won’t have to pay the fine stemming from the Man of God headband he wore during the Week 3 contest against the Seattle Seahawks, Davis said in an Instagram post.

“My agent just told me that I won my appeal and won’t have to pay the headband fine,” Davis wrote.

Davis also used the post to commend the children at St. Louis King of France Catholic School, who made their own versions of Davis’ headband and wore them to school on Tuesday.

“Of course you don’t want to be fined,” Davis said last week. ”Nobody wants to lose money but I think any time that the conversation about God is brought up, especially in these times, I think it’s always a positive or silver lining. If he can get glory from it, I think he can get glory from it whether I personally wear the headband or don’t wear the headband. He’s always gonna be in control of the whole situation. We’re still all good.” 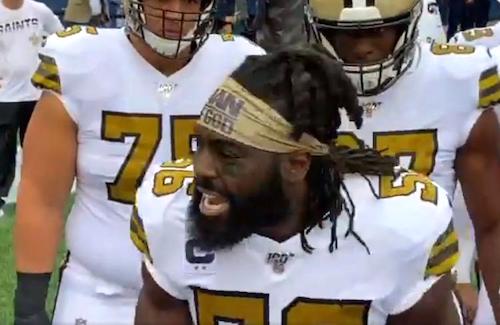 After receiving notice of the fine, Davis announced that he would be selling the headbands with 100 percent of the profits going to St. Dominic Hospital in Jackson, Mississippi.