It opened with the pope and closed with a Christmas carol: how CBS covered the news on Christmas Eve 1984

How have things changed in the last 36 years?

I stumbled on this YouTube video the other night: the full broadcast of The CBS Evening News with Dan Rather from Christmas Eve 1984.

The broadcast opens with the chanting of the Gospel antiphon in Bethlehem, then segues to Pope John Paul II celebrating Midnight Mass in Rome.

And that’s just the first 30 seconds. (It may be significant that the Executive Producer of the Evening News at that time was the late, great Lane Venardos, a Catholic.)

What follows is 28 minutes of television that looks like it was retrieved from a time capsule — or, maybe, from another planet.

Back then, the first big story was about a deadly coal mine explosion in Utah, followed by news of an election in India and a Christmas truce in El Salvador and the death of a defense minister in Moscow. There was also the news that Peter Lawford had died in Hollywood at the age of 61 (my age today!).

There were ads for cereals, cookies and Publishers Clearing House — plus a fancy new Commodore 64 computer, for the shockingly low price of $200.

One of the stories recounted efforts to ban TV ads for beer and wine, just as was done with cigarettes some years earlier.

Conspicuously absent: any story or any mention at all in the entire broadcast of the newly re-elected President Ronald Reagan. Presumably, he was vacationing in Santa Barbara and didn’t do anything newsworthy. Can you imagine that today?

The program concludes with a three-minute musical montage, set to a disco “We Wish You a Merry Christmas,” featuring CBS News staffers from around the world wishing viewers — what else? — Merry Christmas.

And there’s this: from the Washington bureau, at 26:49, you can spot a certain 25-year-old Production Secretary, sporting a beard and a nice necktie. (Fun piece of trivia: that was the night I got engaged.)

What a time it was. 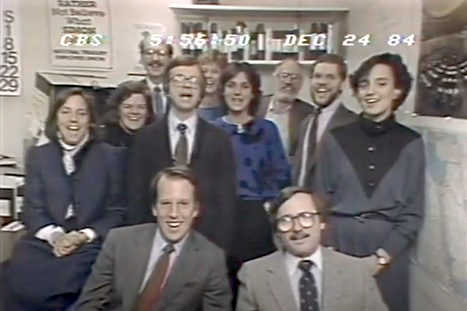