Fixing what is broken: Homily for January 17, 2021, 2nd Sunday in Ordinary Time

Of all the stunning images we have seen over the last 10 days, there is one picture that stands out from the rest.

It is the photograph of Congressman Andrew Kim from New Jersey. You may have seen the picture or heard the story.

It deserves to be heard again.

At about 1 a.m. on January 7th, after voting to certify Joe Biden’s election victory, Congressman Kim walked through the Capitol building to go home after that long, awful day. As he made his way through the wreckage in the rotunda, he stopped to see what had happened to the building he loved — water bottles, clothing, trash, an American flag lying on the floor. He saw police officers putting pizza boxes and garbage in plastic bags. He asked one of them if he had an extra bag. He did and handed it to him.

And with that, Andy Kim — a son of Korean immigrants, who is only in his second term in congress — took the bag and got down on his knees. He started helping them clean up the mess. 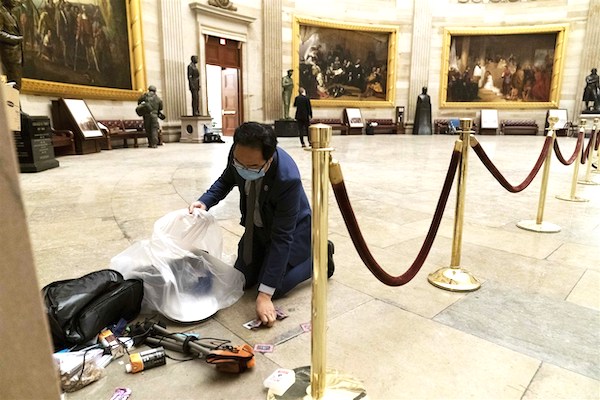 A photographer named Andrew Harnick with the AP happened to be passing through the hall and saw what was happening. He recognized the congressman and snapped a picture of the moment. Later that day, the photograph was published. It caused a sensation.

A reporter tracked down Andy Kim and asked him why he did it. After all, it was in the middle of the night.  The photographer discovered him there almost by accident. He obviously wasn’t doing it for the publicity.

The congressman put it very simply.

“When you see something you love that’s broken,” he said, “you want to fix it.”

He was speaking about the Capitol building.

But I think it goes so much deeper than that.

If we understand anything right now, it is this: something we love is broken.

Our sense of justice and decency and respect.

And yet there is this:

“When you see something you love that’s broken, you want to fix it.”

Congressman Kim spoke those words on the day after Epiphany.  The timing could not have been more perfect.

We’ve just finished the Christmas season — and that message is the very essence of the Christmas story. That is what the Incarnation is all about! God saw that the world he loved was broken and gave us his son to fix it. He lived with us, ate with us, walked with us, suffered with us, died for us — all to fix the broken world that he loved.

The Gospel today reminds us that part of that involved his call to his apostles — and by extension, his call to each of us. His first question to the strangers who followed him was “What are you looking for?” They wanted to know where he was living and he told them, “Come and see.”

And the rest is history.

In fact, it is our history. The history of every one of us. He is still asking us today, “What are you looking for?,” still inviting us to follow him. If we are honest, we are looking for more than just where he is living. We are looking for another way of living. A way that is The Way. A way of salvation that can draw us closer to the Father by following the Son.

A way of being true disciples.

But we realize that discipleship is more than just following, more than just coming and seeing. It requires surrender. And sacrifice. And work — the great work of continuing what Christ began by carrying the Gospel to others and living it in the world.

It isn’t easy. And one of the tragedies of this moment in our history is realizing, with a devastating urgency, that we have so much of his work left to do.

There can be no more important mission in our time. Our great call as Catholic Christians is to work to heal what is wounded, to mend what is torn.

To fix what is broken.

We need to get down on our knees and begin the slow hard work of cleaning up the rubble — not just around us but within us. Because there is where the most important work has to begin. With prayer. With resolution. With humility.

We need to be better than we are, each of us. We need to do something radical — becoming more forgiving, more patient, more prayerful.

In our violent, battered, angry world, the most countercultural thing we can do is bear witness to the Prince of Peace.

To give dignity to those who are disrespected.

To listen to those who are ignored.

To bind the wounds of those in pain.

Especially now, we need to live as people of mercy. Of compassion.

In a time that so often seems hopeless…we need to be people of hope.

Last week, I had a doctor’s appointment in Manhattan, and as I was making my way down 14th Street to take the subway back to Queens, I saw this large etching on the sidewalk in chalk. It was a familiar quote, one of my favorite poems by Emily Dickinson.

“Hope is the thing with feathers

That perches inside the soul,

And sings the song without the words

And never stops at all.”

Emily Dickinson saw hope as something small and relentless and full of song — a close cousin of the Holy Spirit.

It never stops. It persists, in spite of everything.

Last Easter, Pope Francis said as much in his homily at the Easter Vigil. It is a message we need to remember now, as we step into the broken world God loves and try to fix it.

In the depths of the pandemic — in a moment of profound darkness and despair, in a world haunted by death — the Holy Father reminded us that we are people of the Resurrection.

I leave you with his words.

“God is faithful,” he said. “He did not abandon us; he visited us and entered into our situations of pain, anguish and death. His light dispelled the darkness of the tomb: today he wants that light to penetrate even to the darkest corners of our lives. Dear sister, dear brother, even if in your heart you have buried hope, do not give up: God is greater. Darkness and death do not have the last word. Be strong, for with God nothing is lost!”