From News 12 in New York City:

A prestigious New York City priest has been accused by a Bronx woman of forcible touching.

Ashley Gonzalez, a 22-year-old who worked as an overnight security guard at St. Michael the Archangel Church on West 34th Street in Manhattan, is calling for the arrest of 75-year-old Father George William Rutler.

Warning: The recount of the alleged incident may be disturbing for some.

“It was like a monster,” said Gonzalez describing her alleged encounter Rutler.

News 12 obtained video she recorded that she said shows Rutler watching pornography on his computer in front of her.

“He looked at me with a smile, looked away, and he put his hand inside his pants, and he was playing with himself,” Gonzalez said, recalling her second day on the job at the church on Nov. 4. She said she tried to leave the pastor’s office, but he slammed the door shut.

“He aggressively threw himself on me and grabbed me sexually, aggressively, and I was fighting him off of me,” Gonzalez said, who added that she sent frantic text messages to her mother begging for help.

Read on and watch the video report.

The Archdiocese of New York says Father Rutler has denied the charges, but that he has stepped aside from his parish while the investigation goes forward. It says there have been no other accusations against him. EWTN is also suspending broadcasts of his programs during the investigation.

UPDATE: Below is a letter from Father Rutler to his parishioners that has been circulating on social media. 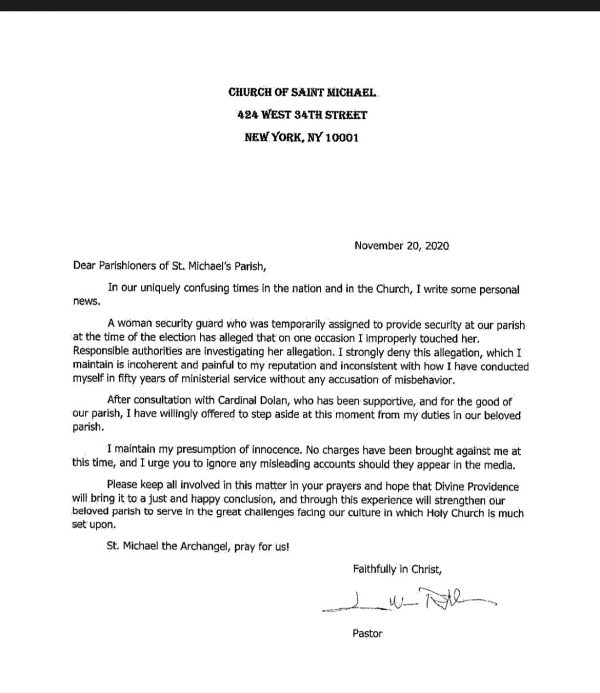