Billy Graham statue to replace that of white supremacist in U.S. Capitol

A life-sized statue of the Rev. Billy Graham will be installed in the U.S. Capitol’s Statuary Hall collection sometime next year, replacing a statue of a white supremacist that both the state of North Carolina and the U.S. House want removed.

Last week, a North Carolina legislative committee approved a 2-foot model of the statue depicting the famous evangelist who died in 2018.

The sculptor, Chas Fagan, will now begin working on a life-sized model that will have to be approved by a congressional committee. Fagan has previously created several statues of religious figures, including St. John Paul II for Washington’s Saint John Paul II National Shrine, as well as Mother Teresa for the Washington National Cathedral.

The U.S. Capitol, Statuary Hall collection consists of 100 statues of prominent people — two from each state. Graham, a North Carolina native who was born on a dairy farm in Charlotte, will take the place of Charles Aycock (1859-1912), a former governor.

Aycock was one of the masterminds of the 1898 Wilmington, North Carolina, race riot and coup, in which a local government made up of Black Americans was overthrown and replaced by white officials. North Carolina’s other statue is of Zebulon Vance (1830-1894), a former governor and U.S. senator who was also a Confederate military officer.

The artist will be familiar to many people for his statue of St. John Paul at the shrine in Washington. 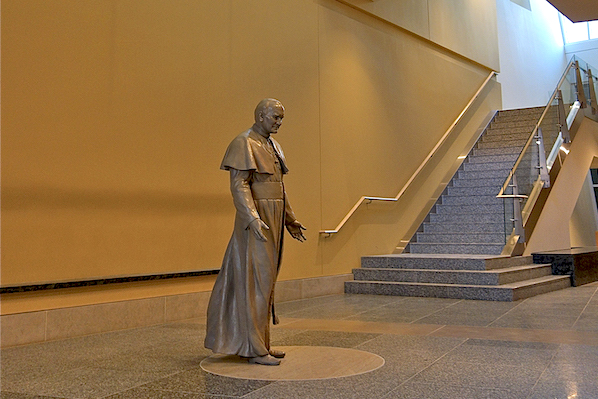