Yes, Spielberg’s ‘West Side Story’ is really that good

The first thing to know about Steven Spielberg’s stunningly good film of “West Side Story” is that it doesn’t really take place in New York City.

Or, at least, it doesn’t look that way.

It looks more like Dresden at the end of World War II. Or Berlin. Or Hiroshima. It’s definitely not the New York you expect. It’s clearly a war zone. (More than a few times I thought of “Saving Private Ryan” and “Schindler’s List.”)

The landscape is ruins: crumbling walls, debris, dust, smoke. Some of it could almost be a moonscape. It’s devoid of vegetation. No trees. All pavement.  The opening shot seems to pay homage to Robert Wise’s opening from the 1961 film, as the camera swoops over a concrete maze of steel and brick. We’re flying over streets, right? But no. The camera shifts and we realize it’s the rubble of a construction site, what will be the future location of Lincoln Center. It’s an inspired, nervy move, and it works.

After that, it just gets better and better. This isn’t your grandfather’s “West Side Story.”

A lot of ink has been spilled by people wondering if the world really needed another movie version of this acclaimed musical. Short answer: yes. Almost every choice Spielberg and screenwriter Tony Kushner have made improves on the original — and sometimes, even, surpasses it in sweep, scope, vision and pure chutzpah. The key characters now have backstories that deepen the relationships and help explain their choices. Songs have been re-ordered, characters rethought and adjusted — most notably with Anybodys and Rita Moreno’s  Valentina, a new character who is the widow of the original’s Doc. The story itself has not been radically changed. (Though there’s a lot more grit and blood than I expected.) All the songs are there. But everything is just different — and better.

Even the choreography by Justin Peck works with variations of the Jerome Robbins original, but then adds its own muscle, urgency and heft. (And boy, he knows how to use swirling skirts, leaps and spins.) Spielberg and Peck have cut back a lot of the dancing — Robbins made everything dance, in a way that was brilliant but also, in its way, mannered. (His opening for the movie expanded on the stage version in an effort to make the sudden dance moves seem more natural. But you never forgot that they were still teenage gang members in neat jeans and white sneakers doing ballet.) In Spielberg’s version, there’s  dance movement, of course, but it’s more purposeful; it’s not dance for the sake of dance. “Cool” and “The Rumble” have more actual brawling than dancing — and that’s a good thing.

An even better thing is the cast. I told my wife as we were leaving the movie theater (both of us sniffling and dabbing our eyes), “This is another case of an actress doing a role she was born to play.”  You won’t find a better Maria than Rachel Zegler. You just won’t. Ditto for Ariana DuBose’s Anita and Mike Faist’s Riff. Even Ansel Elgort as Tony — a character that doesn’t get much to do besides sing, swoon and die — brings credibility and true sorrow to the role. 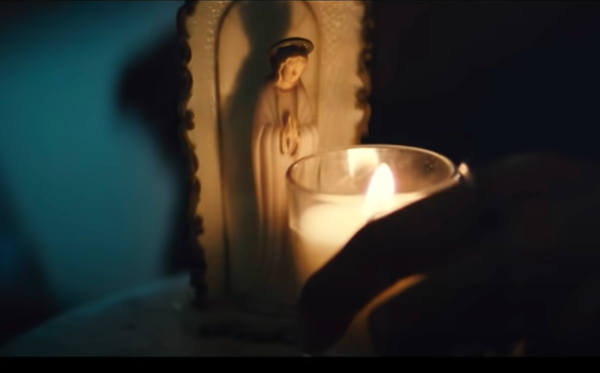 Also of note: as in the original film, Catholicism is still a potent presence in the story. Every bedroom has a crucifix; gold crosses hang from necks; gang members light a candle before a statue of the Virgin Mary; and Anita’s portion of the “Tonight Quintet” unfolds, ironically, in a church as she is praying the rosary with several other women (all wearing white veils.)  The setting for “One Hand, One Heart” is no longer the dress shop, but a room of The Cloisters, as Tony and Maria kneel before a huge stained glass window and a cross.

Some may be wondering about Spielberg’s choice to use stretches of dialogue in Spanish without subtitles — an idea some have blasted as limp political correctness. But I think it was smart, and it only serves to give the movie a sense of realism. (Honestly, I felt at times like I was in the kitchen of an immigrant family in Brooklyn today. This is the way it is.)  The technique is used sparingly but believably, usually when characters are arguing or struggling to express the inexpressible. It’s also a hallmark of the effort to assimilate by speaking the language of the adopted homeland. (And: often, they are called on it — as when Anita chastises Maria for her Spanish and reminds her she needs to speak English in New York.)

After one-year delay due to COVID, this “West Side Story” was worth the wait. And this is a “West Side Story” the world needs right now — a plea for tolerance, dialogue and understanding at a moment when the world seems more polarized and divided than ever.

What more can I say? Go. See it for yourself. You can thank me later.