‘We need her’: Why more people are turning to St. Dymphna

A timely reminder during Mental Health Awareness Month, from The Los Angeles Times:

First, a small St. Dymphna charm showed up in her jewelry box without explanation. Then a St. Dymphna prayer card fell out of a book she happened to pick up.

And after showing up one morning in 2019 for a meeting about a new mental health ministry at St. Martin de Porres Catholic Church in Yorba Linda, Zuniga soon found herself serving as one of two co-leaders of St. Dymphna’s Disciples — a group that works to reduce stigma around mental illness in the church and supports those in mental distress.

“I didn’t suggest that name and I didn’t plan to lead this group,” said Zuniga, 49, a licensed marriage and family therapist and art therapist. “But it’s like she’s kind of been nudging me along, saying, ‘Hey, there’s a need here.’” 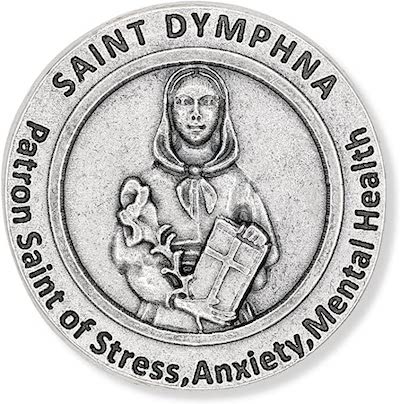 According to Catholic teaching, St. Dymphna was born in Ireland in the 7th century. When her mother died, her father sought to marry his own daughter. He followed Dymphna to Belgium and then killed her when she refused his advances.

When her remains were rediscovered 600 years after her death, it was believed they could heal people who were mad or possessed. A chapel was built in her honor. She’s been known as the patroness of those with nervous disorders ever since.

St. Dymphna’s popularity has waxed and waned over the centuries, but as anxiety and depression rates have skyrocketed in recent years due to the cascading crises of global warming, political upheaval and COVID-19, she’s having something of a renaissance. “Dymphna groups” are springing up in a number of parishes across the country, and as a sign that she’s being accepted by a new generation, “Dymphna” has become an increasingly common confirmation name for young adolescent girls.

“She’s becoming more popular because we need her,” Zuniga said. “Look at the state of mental health throughout the world. We are in a crisis of the soul.”

Curious about Dymphna? Check out the St. Dymphna National Shrine (where you can also buy religious medals and candles).