He was known as “the voice of summer” — Vincent Edward Scully, Vin Scully, simply the greatest sports announcer of all time.

Voice of the Dodgers. A son of the Bronx. A graduate of Fordham. A devoted husband, father and Catholic.

When he died last week, at the age of 94, we lost an American original.

But we also lost someone who announced more than just hits, runs and errors. In his way, Vin Scully also announced the Good News. And he understood, deeply,  the point of this Gospel we just heard.

“Where your treasure is, there also will your heart be.”

The question before us this day:

Where is our treasure?

A few years ago, Vin Scully was honored with a Life Achievement Award at a conference of Catholic writers and editors. And he told this story.

In 1956, the Dodgers were invited to Japan for a series of games — and their famous announcer traveled with them.

When the series was over, Vin Scully and some friends decided to fly back to the United States by way of Rome. One of Scully’s best friends was in the Knights of Malta. This friend was able to arrange a private audience with the Holy Father — Pope Pius XII.

Scully was overjoyed and couldn’t wait to call his Irish mother and tell her he was about to meet the pope. “Oh, remember everything,” she told him. “I want to be able to feel like I was there.”

A few days later, the group arrived in Rome and went to the Vatican. At the appointed time, Scully and a group of 14 people were taken to a room outside the papal apartments. One of the people in the group was a player with the Dodgers, Ralph Branca, who had just gotten married, and was traveling with his bride, Ann.

“We were told not to speak to the pope unless he spoke to us,” Scully remembered. “We were lined up and the pope started at one side and talked French and Italian. I think he talked a little German. Eventually, he came to the three of us. Ann, the young bride, broke the rule and spoke. She said, ‘Your Holiness, would you bless my family?’ Which he did. And then he turned to the player, Ralph Branca, and said, ‘Where are you from, my son?’”

“And now here’s the moment,” Scully said. “The pope started to turn to look to me, and believe me, my knees were trembling, my throat was dry, the palms were sweating and I was thinking, ‘Remember this for Ma,’ and the pope turned to me and looked at me and he said, ‘Are you with them?’ And I said ‘Yes.’ And he turned and walked away.”

That was Vin Scully’s brush with greatness. It wasn’t much of a story to tell his mother.

But he said that over the years, he came to understand that the answer to that question, “Are you with them?,” was actually something he was most proud of.

He was one of them. He got to cheer the heroes and see history being made and announce it to the world. And he hoped he had done it well.

To make his point, he quoted part of this Gospel, and one of its most famous passages.

As he put it, “To whom much is given, a great deal is required.” And Vin Scully hoped that in the course of his life — by being “with them,” by serving the fans — he had been able to give what was required.

He also hoped that at the end of his life, he would be seen as one who gave back to God what was required, someone who lived for what mattered. He concluded his talk by asking for someone to take a picture of all the priests and religious who were at the conference, so at the end of his life, he could show God the picture and say, “I’m with them.”

“Where your treasure is, there also will your heart be.”

Vin Scully was proud to show the world what he treasured — above all, his faith.

He leaned on it often. His father died when Vin was just four. Years later, his first wife, Joan, died of an accidental overdose when she was 35. His son, Michael, was later killed in a helicopter crash.

Scully said it was his faith that sustained him. He often mentioned his devotion to the Blessed Mother.

“Her prayers are more powerful than those of the rest of heaven combined,” he once said. “No one was closer or more devoted to Christ on earth, so it only makes sense to see the same thing in heaven. Now, the Blessed Virgin seeks to help her spiritual children get home to spend eternity with her Son.”

If you want to know how we can achieve that, Christ this morning tells us.

“Gird your loins, light your lamps. Be like servants who await the master’s return.”

Live in expectation for what is to come, for who is to come.

Store up treasure in heaven.

This reading continues the theme from last Sunday, when we heard the parable of the man who built a bigger barn for everything he owned, only to be told his life was about to end.

These readings force us to ask ourselves: What are we collecting for? And why? Invest in what lasts. This shouldn’t shock us. We know what that means.

That means invest your life in things like mercy. Forgiveness. Patience. Prayer.

Above all, invest in a life of faith.

Faith: It’s a word we hear no less than six times in today’s second reading. It is the cornerstone of everything. Yet in our faithless, disbelieving age, too many just shrug it off. They think, “I’ll worry about that later…”

This Gospel reminds us: we shouldn’t. We can’t. Later may never come.

Reflecting on his life, Vin Scully once quoted a proverb I mentioned in my very first homily — delivered from this pulpit, the day after I was ordained:

“If you want to hear God laugh, tell him your plans.”

“You know,” Scully said, “we try to write our own script and it’s a mistake. There’s a script already written for us. Faith is the one thing that makes it work, makes me keep going. You appreciate what you’ve been given.”

And he explained: “This isn’t the only stop on the train. There’s one big one we’re still waiting for. I think about that every week when I’m in line going up to receive Communion.”

This day, as we get in line and prepare to receive Communion, Christ calls on each of us to remember the destiny, the judgement, the final stop that awaits us.

He challenges us to take stock — to live in expectation, but to journey in hope, sustained by faith.

“This isn’t the only stop on the train.”

We are meant for more.

And so it’s worth asking ourselves: Where do we hope to go?

What are we preparing for?

Where is our treasure? 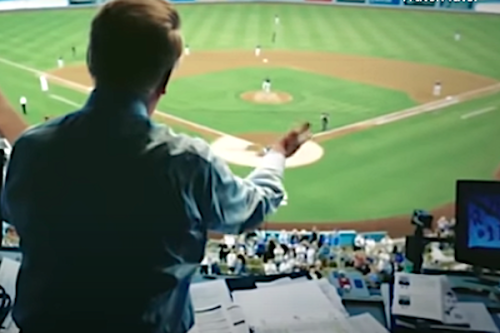