“All things are possible for God.”

We’ve heard that before, haven’t we?

“All things are possible for God.” Do believe that? It requires a leap of faith.

Recently, I read about a woman who made that leap, named Shelly Pennefather.

Shelly Pennefather grew up in northern Virginia, one of six children in a bustling Catholic family, the kind of family that sent all the kids to parochial school and prayed the rosary every night. That kind of family life can have an impact. When she was in sixth grade, Shelly’s teacher asked the class, “What do you want to be when you grow up?”

Shelly answered: “I’m going to be a saint.”

But first, she had other things to do. For a while, it seemed she would be a basketball star. Shelly was extraordinary on the court. She was a legend by the time she had finished high school. She went on to Villanova, where her skills were so remarkable, she was named the best women’s college basketball player in the country. After graduating, she signed a contract to play with a team in Japan.

But Shelly was homesick, and unfulfilled. Something kept gnawing at her. She knew that if her team finished in the top six, it meant she could go back to the states early. So she made this promise to God: if the team did that, she’d spend her weekends back in Pennsylvania doing volunteer work.

Well, the team made the ranking. And Shelly kept her word. She showed up faithfully every weekend to serve the poor at a soup kitchen run by the Sisters of Charity in Norristown, Pennsylvania.

When the new season started, she returned to Japan. But her life was unsettled. She felt isolated and alone. Shelly spent her free time praying, wondering, searching for answers about what she should do. In the middle of all that, she was offered the deal of a lifetime: a $200,000 a year contract to continue playing in Japan. It would have made her one of the richest women basketball players in the world.

She turned it down — and then did something radical.

On a June morning in 1991, Shelly Pennefather put on a long blue dress and a pair of shoes she would never wear again and drove her Mazda to the Monastery of the Poor Clares in Alexandria, Virginia. She hugged her family one last time.

“I love you all,” she said, and then turned and walked into the cloister and left the world.

Shelly Pennefather closed the door behind her and became Sister Rose Marie of the Queen of Angels.

A young woman who seemed destined to make sports history — and a lot of money — chose another path.

“Go, sell what you have, give to the poor and come, follow me.”

Shelly felt called to become a nun — and not just in any order, but in one of the strictest religious orders in the world, cut off from outside contact. To friends who wondered why she did something so bold, she couldn’t really explain it. “I would never choose this for myself,” she told one friend, “but this is what I’m called to do. I’m doing this for God.”

In 2019, ESPN sought to answer the question many in the sports world had been asking: whatever happened to that incredible young athlete, Shelly Pennefather? She was offered all that money and walked away from it. Where is she now?

They didn’t have to look far.

A reporter and camera crew traveled to the monastery in Virginia for the 25th anniversary of her solemn profession. Shelly’s family was there. So were her teammates from Villanova. Looking at them, Sister Rose Marie smiled and said, “I always knew there was a chance one of us would end up incarcerated. I just didn’t expect it would be me.”

In the most poignant moment of the celebration, Sister Rose Marie was allowed to step out of the cloister for a few brief minutes to hug her friends and family, including her mother, who held her daughter in her arms for the first time in 25 years.

We hear about people like Shelly Pennefather and can’t help but be amazed and humbled. God’s ways are mysterious — and beautiful. He makes the impossible possible.

The blind can see. Lepers are healed. The hungry are fed. A basketball star can become a nun and find riches behind closed doors, praying for the broken world she left behind.

Set against the backdrop of this Gospel, the story of Shelly Pennefather raises this important question: what about me? What can I give for God? What am I willing to give up?

Mark tells us in this Gospel, “The man went away sad for he had many possessions.”

I think this episode speaks not just about what we possess, but what possesses us.

Not all the things holding us back from following Jesus are “things.”

We may possess pride. Or anger.

These things might make us feel comfortable for a little while. They may even make us feel powerful. But they are useless. They are empty baggage.

There are many ways to be attached to the world and to be possessed by it. The challenge facing all of us who try to follow Christ is to detach, to separate from it.

It requires surrender and trust — the kind that makes saints.

One of the beautiful details of this Gospel is how Jesus responds to the young man. Mark put it so simply: “Jesus, looking at him, loved him.”

Jesus didn’t judge the rich young man. He didn’t view him with contempt or scorn or disappointment.

No. He loved him.

And he loves us. Wherever we are on our journey, no matter how rich or poor, no matter the challenges we face or the baggage we carry.

His message is simple: “Give up whatever is holding you back. Do what seems impossible. Follow me.”

This morning, as I speak, Shelly Pennefather, Sister Rose Marie, is doing that. She is in Virginia, in that monastery, praying for the world she left. She is praying for all of us. Please keep her in your prayers, and all who are discerning God’s will, especially those  considering a vocation — whether to the consecrated life, the priesthood, marriage or the diaconate.

Finding out what God wants — and then doing it — is never easy.

God, of course, isn’t asking all of us to give up a lucrative career and live behind a cloister wall. We can’t all be Shelly Pennefather. And we shouldn’t be.

But as we come forward to receive Christ in the Eucharist this morning, we come forward, like the rich young man, as seekers. Seeking grace. Mercy. Consolation. Hope.

We come forward with our hands outstretched, praying to be the children of God we were meant to be — to give away whatever is holding us back, trusting in his mercy and love to guide us on life’s journey.

May we do that with courage and trust — daring to hope, like young Shelly Pennefather, that we can grow up to become saints. 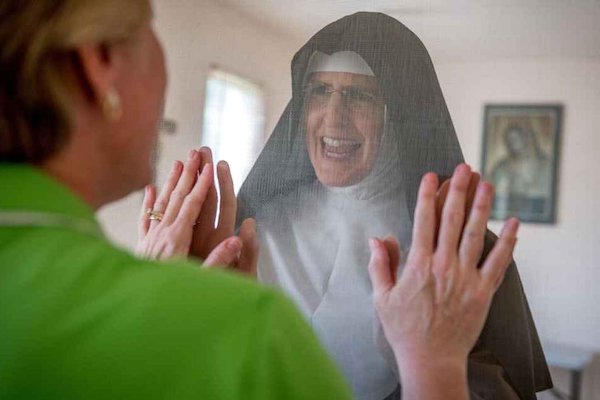