‘Thank you for your pastoral zeal’: The pope’s message to Father James Martin

Details, from The New York Times:

A leader in the Roman Catholic Church’s effort to reach out to L.G.B.T.Q. Catholics revealed on Sunday that Pope Francis had sent him a deeply encouraging note, capping an especially disorienting week on the Vatican’s attitude toward gay rights.

On Tuesday, the Vatican confirmed that it had tried to influence the affairs of the Italian state by expressing grave concerns about legislation currently in Parliament that increases protections for L.G.B.T.Q. people. And days later, the Vatican’s second in command insisted the church had nothing against gay rights, but was protecting itself from leaving the church’s core beliefs open to criminal charges of discrimination.

Nearly eight years after Pope Francis famously responded, “Who am I to judge?” on the issue of gay Catholics, it has become increasingly difficult to discern where he stands on the issue. A growing dissonance has developed between his inclusive language and the church’s actions.

The result is confusion and frustration among some of the pope’s liberal supporters who wonder whether the 84-year-old Argentine remains committed to a more tolerant church and is simply struggling to grasp the rapidly shifting contours of a difficult issue, or is really a social conservative trying to please everyone.

What is clear is that the new note will serve as fresh fodder in a battle within the church between frustrated progressives who hope the pope’s inclusive message will finally lead to change and wary conservatives, who are hoping the church will maintain its traditions. The Vatican’s own news service later reported that the pope had sent the letter.

In the handwritten letter dated June 21 and made public on Sunday, Francis praised and thanked the Rev. James Martin, a prominent Jesuit and the author of a book about reaching out to L.G.B.T.Q. Catholics.

“I see that you are continually seeking to imitate this style of God,” the pope wrote. “You are a priest for all men and women, just as God is a Father for all men and women. I pray for you to continue in this way, being close, compassionate and with great tenderness.”

Those words will almost certainly give succor to Francis’ liberal supporters, many of whom were deeply disheartened by a March response by the Congregation for the Doctrine of the Faith, the church’s top doctrinal office, to an inquiry about whether Catholic clergy have the authority to bless gay unions.

“Negative,” was the answer, which Francis approved.

Father Martin posted the full translation of the pope’s letter on Facebook, below: 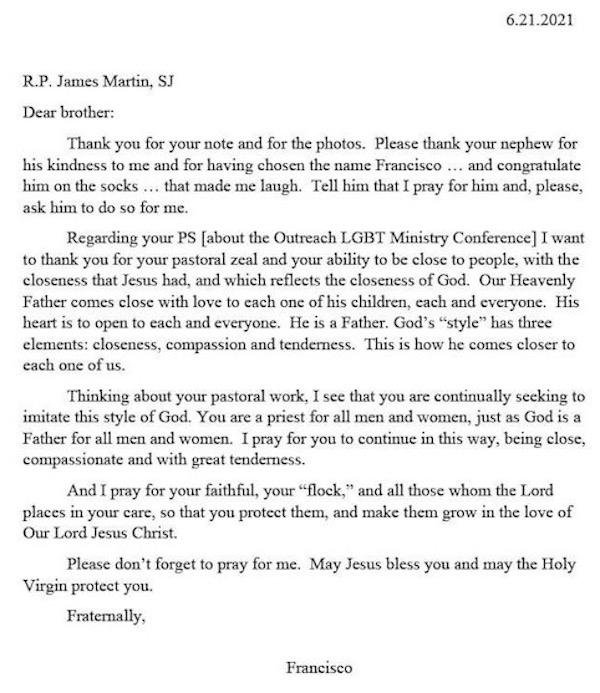