Sister Janet Mead, whose ‘Our Father’ was a smash in the ’70s, has died

Those of us of a Certain Age remember this song vividly, and recall with fondness the voice of the singing nun behind it. Sister Janet Mead was very much a woman of her time — and her interpretation of The Lord’s Prayer reached millions around the world:

Sister Janet Mead, the South Australian nun who became internationally famous for her rock rendition of The Lord’s Prayer, has died aged 84.

While best remembered for her meteoric rise to fame in the music world, Sister Janet devoted most of her life to helping the homeless and disadvantaged. 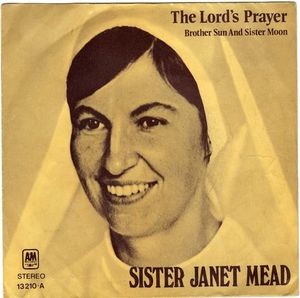 She shot into the charts in 1974 with her international hit The Lord’s Prayer, putting the Our Father prayer to a rock tune.

The single was distributed to 31 countries and sold more than 2 million copies worldwide.

She was the first Australian artist to have a gold record in the US and was even nominated for a Grammy award but lost out to Elvis Presley.

She pioneered the concept of the rock mass in South Australia and held them regularly in the St Francis Xavier Cathedral in Adelaide.

Despite the fame and fortune, Sister Janet shunned the spotlight and donated all her royalties to charity.

She continued to teach at St Aloysius College despite the pressure of becoming a chart-topping star.

“It was a fairly big strain because all the time there are interviews and radio talkbacks and TV people coming and film people coming,” she said.

She turned down offers to tour the US.

The single entered the Billboard Hot 100 chart on 23 February 1974, charted for thirteen weeks and reached a peak of number four during Holy Week in April. The record also reached number two on the Adult Contemporary singles chart. It made Mead the first Roman Catholic nun to have a hit record in the United States since Jeanine Deckers, the Singing Nun, hit #1 with “Dominique” in late 1963. It also became the only song to hit the Top 10 in which the entire lyrical content originated from the words of the Bible. More specifically, it is the only Top 10 hit whose lyrics were attributed to Jesus Christ.

Eternal rest grant unto her, O Lord, and let perpetual light shine upon her …

Below is the original video for the song.