Saying grace: the importance of those words we pray before meals

Some timely insight, just a few days before Thanksgiving, in The Washington Post:

The state of grace in contemporary America is hard to quantify, though the practice remains prevalent: Almost half of all Americans said they regularly took a moment before meals to give thanks, according to a 2017 poll by The Washington Post and the Kaiser Family Foundation.

This Thanksgiving, it’s likely to be heard at tables around the country. The very purpose of the holiday, after all, is to express gratitude. Many families who don’t typically pray before meals will do so, and those that do might expand the ritual. Kenneth Minkema, executive editor of the Jonathan Edwards Center at the Yale Divinity School, notes that the holiday’s roots trace back to the American colonists, who celebrated days of giving thanks for their bounty in the fall, and then in spring, they marked days of atonement when they fasted and reflected on their sins. “These days, we’re mostly only doing the fun part,” he says.

The act of saying grace — broadly defined as a moment before a meal in which people give thanks — seems to be as varied as recipes for stuffing. The words people utter may be secular or religious, perhaps blended from various traditions. They could be familiar phrases repeated over and over, or invented on the spot. People create games to get their children involved. They say grace over fast-food burritos and elaborate holiday meals.

To Minkema at the Yale Divinity School, grace serves several purposes. Reciting the same words together or participating in a regular ritual creates a feeling of connection with those around us, he says. “It serves to strengthen and confirm the bond of family or community,” he says. “It helps to acknowledge that we are one.” And across religions, it is also an acknowledgment of the source of the food before you. “There is the creator/God but also other people, the earth, and the moral responsibilities that go along with that,” he says. “It also has a way of pulling you inward and reminding you of those responsibilities.”

M.J. Ryan, whose books on gratitude include “A Grateful Heart: Daily Blessings for the Evening Meals from Buddha to the Beatles,” says that whether the motivation is religious or secular, taking a moment to truly feel gratitude can affect one’s life long after the dishes are cleared.

And, if you’re looking for ideas, here is my prayer from A Deacon Prays: 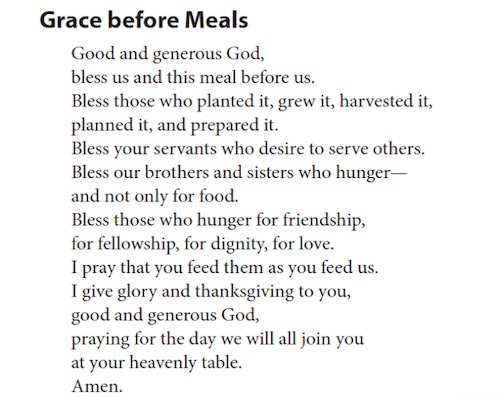