‘Lord, in my luggage I have Scripture that I want to take to your children across this border. When you were on Earth, you made blind eyes see. Now, I pray, make seeing eyes blind. Do not let the guards see those things you do not want them to see.’

Anne van der Bijl, a Dutch evangelical known to Christians worldwide as Brother Andrew, the man who smuggled Bibles into closed Communist countries, has died at the age of 94.

Van der Bijl became famous as “God’s smuggler” when the first-person account of his missionary adventures—slipping past border guards with Bibles hidden in his blue Volkswagen Beetle—was published in 1967. God’s Smuggler was written with evangelical journalists John and Elizabeth Sherrill and published under his code name “Brother Andrew.” It sold more than 10 million copies and was translated into 35 languages.

The book inspired numerous other missionary smugglers, provided funding to van der Bilj’s ministry Open Doors, and drew evangelical attention to the plight of believers in countries where Christian belief and practice were illegal. Van der Bijl protested that people missed the point, however, when they held him up as heroic and extraordinary.

“I am not an evangelical stuntman,” he said. “I am just an ordinary guy. What I did, anyone can do.”

No one knows how many Bibles van der Bijl took into Poland, Czechoslovakia, Yugoslavia, East Germany, Bulgaria, and other Soviet-bloc countries in the decade before the success of God’s Smuggler forced him into the role of figurehead and fundraiser for Open Doors. Estimates have ranged into the millions. A Dutch joke popular in the late 1960s said, “What will the Russians find if they arrive first at the moon? Brother Andrew with a load of Bibles.”

Van der Bijl, for his part, did not keep track and did not think the exact number was important.

He underwent a spiritual conversion after a stint in the Dutch army in the 1940s, and eventually became an evangelist, undertaking a controversial ministry of smuggling bibles into Communist countries:

In 1957, he made his first smuggling trip across the border of a Communist country, entering Yugoslavia with tracts, Bibles, and portions of Bibles hidden in his blue Volkswagen. As he watched the guards search the cars in front of him, he prayed what he would later call “the Prayer of God’s Smuggler”:

“Lord, in my luggage I have Scripture that I want to take to your children across this border. When you were on Earth, you made blind eyes see. Now, I pray, make seeing eyes blind. Do not let the guards see those things you do not want them to see.” 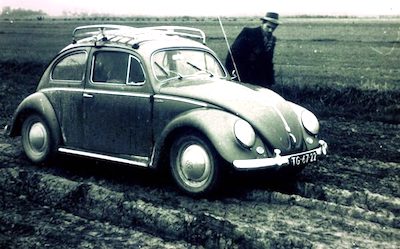 We are drawn to Brother Andrew because we relate to him. His relatable nature is, in fact, why we know him as “Brother Andrew” in the first place. In his lifetime of travel around the world, he became “everyone’s brother” because he lived as a brother to all who follow Christ.

In reading about him, we are delighted to see how God used an ordinary man like Brother Andrew. Because his story suggests God might also use ordinary people like us in extraordinary ways.

If Brother Andrew talked with each of us, he would likely encourage us along these exact lines. He would tell us as he has told many others, “The Bible is full of ordinary people who went to impossible places and did wondrous things simply because they decided to follow Jesus.”

“The real calling,” he has said, “is not a certain place or career but to everyday obedience. And that call is extended to every Christian, not just a select few.”