A familiar presence in our parish died suddenly last week. Yorke Mizelle was active in a variety of ministries in the parish and founded our Bereavement Support Group. Saturday, he suffered a heart attack doing something he loved, bicycling. He was 80. Yorke’s impact on so many in our parish was profound. As I told his daughter after the funeral: “He did tremendous good here.” This is the homily I preached this morning at his funeral.

I chose this reading because it’s one Yorke knew so well. Every year, I read this Gospel at the prayer service for the Bereavement Support Group. I wanted us to hear it again. We need it today.

I know there are a lot of troubled hearts here this morning.

I want to express my prayers and condolences to Kim, Natasha, and to all of Yorke’s family — and I think that family right now includes everyone in this church. We all feel it.

I won’t lie to you: this is hard.  It hits close to home for all of us at Our Lady Queen of Martyrs. We really have lost a member of our family.

When I spoke to Natasha the other night, she said it for all of us.

“He was always helping people who were grieving,” she told me. “I wish he could help us now.”

Knowing Yorke, he might just look at us and shrug, in that very matter-of-fact way, and say “Well, what did the Gospel just tell you?”

At this moment, when we feel this loss, we need those words to remind us: this isn’t the end of the story. There is more. Jesus promises there is a place prepared for us.

Yorke understood that better than anyone. He was a complicated man who lived a complicated life, one that took him on a lot of detours, but finally led him here, to this church. Here, he sought — as one of the readings just told us — to “make all things new.”  He did as much as he could here, so that everyone he encountered could get to that place, could follow that Way, which is Christ.

He never stopped. The other day, Dennis Portelli described Yorke on Facebook as the hardest working volunteer in the parish. He was right. Yorke never said no.  He went out of his way to look for opportunities to say “Yes.”

I think he came by it honestly. Yorke’s mother Jane Bolin had a remarkable life. She was the first black woman to graduate from Yale Law School and America’s first black female judge. She was sworn in by Fiorello LaGuardia at the New York City Building at the 1939 World’s Fair.  A New York Times reporter interviewed her after and she said she hoped to show a broad sympathy for human suffering, adding “I’ll see enough of it.”

From her, I think Yorke got his sense of compassion, and justice, and service. He helped care for his mother in her later years. Then, coming here, he found his own way to care for others.

One of my earliest memories of Yorke goes back to 2008. It was less than a year after he’d joined the church, and a year after I’d been ordained. We were both newbies. I was asked to speak at an event at St. Joan of Arc parish in Jackson Heights for anyone interested in becoming a deacon. And one of the people who showed up was Yorke.

I was surprised to see him there — and thrilled. “Do you want to be a deacon?,” I asked him.

“Maybe,” he said. “I’m open to anything. I’m exploring my options.”

Yorke explored a lot of options. Though Yorke didn’t actually become a deacon — he was too old by that time — I will say, in effect, he was a deacon.

He had a servant’s heart, wanting to serve God and God’s people. He did it repeatedly, generously, with humility. He was a deacon, in so many ways — he just wasn’t ordained.

Yorke spent three years in the lay pastoral ministry program for the diocese and was certified as a lay minister and catechist. He taught school children, adults, RCIA.

But early in his life as a Catholic, one thing haunted him: the death of his mother.  And as time went on, he saw people in grief — husbands and wives, sons and daughters — who had lost someone they loved. Many were alone.

He saw hearts that were broken.

(Of course, why wouldn’t he? After all, he was a Yankees fan…)

All this led him to establish the parish’s Bereavement Support Group.

What started as a small gathering in the rectory basement grew — expanding beyond the parish, beyond even the Catholic Church. Others in Queens learned about the group and started coming to meetings. Non-Catholics, non-Christians, non-believers came by. No one was turned away. Some stayed for one or two meetings; others stayed for months. All of them, I think, experienced a sense of healing.

Yorke just did what he did best. He listened. He didn’t offer any magical solutions.  He simply practiced one of the most undervalued ministries in Christian life: the ministry of presence.

The ministry of just being there for others.

And because of that, people felt a little less alone.

After the group had been up and running for a few years,  Yorke approached me after Mass one day. He had an idea. He wanted to have a prayer service for the bereavement group during the month of November. Could I help do it? Of course, I said “Yes.” So, with Yorke, and the late, great Big Bob Cospito and my wife Siobhain, we put together a small, simple service here in the church.

We sang hymns. We prayed. We heard Jesus tell us those words of assurance and hope:

Near the end of the service, Yorke would step up to the podium and read the names of those who had died, those we were praying for. It was a litany of memory and loss.

But it was also a litany of love.

For a few moments, everyone there felt a little less alone.

It was Yorke who made that possible. It was his gift.

He walked with people wherever they were on life’s journey — in their loneliness, their sorrow, their confusion, their anger, their doubt and disbelief.

He understood. He had been there.

For this reason, I feel certain he walks with us this morning.

As we pray for Yorke, we ask him to pray for us.

We pray that he has arrived at that place Jesus prepared for him.

The other day, a woman interviewed me and asked that question James Lipton always asked at the end of his TV show, “Inside the Actor’s Studio.”

When you get to heaven and meet God, what do you hope he says to you?

I laughed and told her, “First of all, let’s not assume I’m getting to heaven. I have a lot of work to do!” I suspect Yorke would say the same thing. I thought a moment and added: “I hope he says ‘You made it. Welcome home.’”

This morning, that question made me think about what God would say to Yorke.

And the first thought I had: God wouldn’t be greeting him alone.

He would be surrounded by a great cloud of witnesses.

Yorke might not know them. But they would know him.

They would be the husbands and wives, brothers and sisters, sons and daughters of all those grieving people who over the years had passed through the doors into that meeting room in the rectory basement.

The souls greeting Yorke would be the ones whose names he read during our yearly prayer service, the ones we all remembered and prayed for and loved and missed.

They would know the comfort he gave, the hope he offered to loved ones left behind.

They would be there to say to Yorke, simply, “Thank you.”

And what would God say?

I imagine he would whisper the words we all pray to hear at that moment. 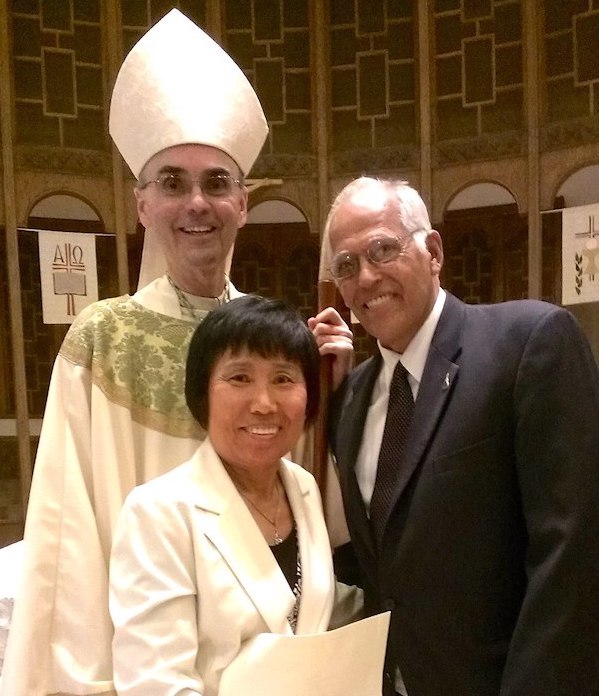