Slovenian Jesuit Father Marko Rupnik, whose mosaics decorate chapels in the Vatican, all over Europe, in the United States and Australia, has been barred from hearing confessions or offering spiritual direction after what the Jesuits described as complaints about his ministry.

Italian news outlets reported the complaints were accusations of spiritually and sexually abusing adult members of a religious order of women in Slovenia. 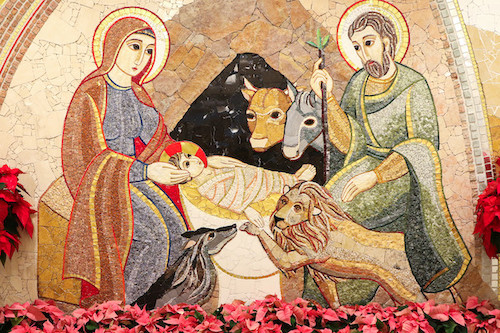 At the beginning of October, the Dicastery for the Doctrine of the Faith “closed the case” because the statute of limitations had expired, said a note from the Jesuit headquarters dated Dec. 2.

The restrictions on Father Rupnik’s ministry “remain in effect as administrative measures even after the response of the Dicastery for the Doctrine of the Faith,” said the statement published by the Jesuit superior’s delegate for “the interprovincial houses and works of the Society of Jesus in Rome.”

… The Jesuits’ statement did not provide details about the allegations beyond saying they regarded “his way of exercising his ministry” and that “no minors were involved.”

An Italian magazine interviewed the artist several years ago:

A Slovenian Jesuit from Zadlog, born in 1954, a priest since 1985, Rupnik has been consultant to the Pontifical Council of Culture since 1999 and currently he teaches at the Pontifical Oriental Institute and the Gregorian University. In the Atelier – in the shadow of the Basilica of Saint Mary Major – the mosaics take shape with which this artist-theologian, a student of Father Tomás Spidlík, has decorated churches all over the world. The ones in the Redemptoris Mater chapel, in the second loggia of the Apostolic Palace in the Vatican, made in 1999, are famous. At the end of 2007 he finished the five Mysteries of Light for the facade of the Lourdes Shrine.

Rupnik is quoted as saying:

One needs to be very familiar with the Word of God – because, as Nicene II says, art is a translation of the Word of God – and with the memory of the Church: the Fathers, the saints, Christian art. One also needs to be inward with the debate of the century in which one lives, that is to be familiar with the contemporary artistic idiom, and to be inserted in the life of the Church. One must have a spiritual life, live the same difficulties as our contemporaries so as to be able to share with them the steps in the redemption bestowed to us. For us at the Aletti Center, working in chorus is fundamental. Working together, constantly engaging in mutual charity and fruitful dialogue. Out of the Church one creates for the Church.