The Roman Catholic Diocese of Charleston announced the death of a Georgetown County priest.

Reverend Michel Bineen Mukad died by suicide Tuesday at the age of 38, the diocese said. Mukad was a priest for more than three years. Mukad was a Parish Administrator at St. Mary Our Lady of Ransom in Georgetown.

The diocese said the exact circumstances are unknown, but Mukad struggled due to the pandemic.

Read the statement in part from the diocese:

My Dear Brothers and Sisters in Christ

It has been a difficult few days. The news of Rev. Michel Bineen Mukad’s death on Dec. 8 was heartbreaking. For more than three years, Father Mukad was a deeply devoted priest that was beloved by his parishioners, and his brother priests. He shared a commitment to the faith that was clear and unwavering. I greatly appreciated his commitment to serving our diocese with an open heart and willing hand.

It is with great sorrow that I must notify you that police have informed us Father Mukad [died by suicide] at the young age of 38. While we do not know the exact circumstances surrounding this tragic event, we do know that he struggled greatly due to the pandemic. 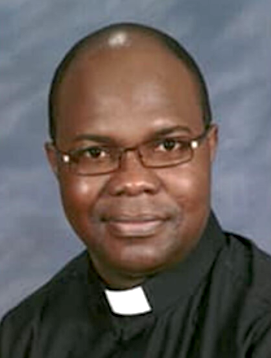 Like many of us, the isolation and anxiety of the modern world can be an unbearable challenge. For some people these feelings and the isolation they bring can become overwhelming.

I ask that each of you take time to call or message others in your immediate circle, and reach out to those who may have no family, or who are unable to be with family, especially during this holy month. We must take care of one another and also our own mental health. If you are struggling to cope, please reach out to a friend, a loved one, your pastor — someone to listen to you. You are not alone. There are many resources to help you through, and the Lord God cherishes you.

More about this life from The Miscellany newspaper:

Father Mukad was born on Oct. 28, 1982, in the Democratic Republic of the Congo. The oldest of eight boys, his parents are Sylvain Mukad and the late Generose Muad. He grew up in the church and attended a minor seminary high school.

In 2001, he began his formation with the Congregation of the Immaculate Heart of Mary aspiracy program and was sent to Saint Pierre Canisius Kimwenza Jesuit College in Kinshasa, earning a bachelor’s degree in philosophy; and Ecole Theologique Saint Cyprien Ngoya in Cameroon, for his master’s in theology.

He arrived in the U.S., his mission country, in 2010, and studied English at the International Language Institute in Washington, D.C., and the Mexican American Catholic College in San Antonio, Texas. He also studied Spanish in San Juan, Puerto Rico.

Father Mukad was ordained to the priesthood on Oct. 6, 2013. He then served more than three years in the Archdiocese of San Antonio, Texas, before moving to South Carolina.

During his time in the Diocese of Charleston, he first served as parochial vicar at St. Mary Help of Christians in Aiken, with sacramental duties at Trenton Correctional Institution and the Trenton Lower Savannah Pre-Release Center. He was then appointed administrator of St. Louis Church in Dillon and Church of the Infant Jesus Mission in Marion.

In a personal writing, Father Mukad said the pastoral work that most impacted him was caring for orphans and visiting prisoners. He also enjoyed his time working with youth and young adults.

These months of lockdown and quarantine and sickness and death have been hard on us all. As I noted a couple months back, clergy have suffered deeply.

Please hold close in prayer all those who are battling anxiety, depression or feelings of helplessness during this time.