First official word, from the Vatican:

The Holy Father accepted the resignation from the pastoral care of the Diocese of Charleston (USA), presented by HE Msgr. Robert E. Guglielmone.

The Holy Father has appointed as Bishop of Charleston (USA) the Reverend Fr. Jacques E. Fabre, CS, Member of the Congregation of the Missionaries of San Carlo (Scalabriniani), currently Administrator of the San Felipe de Jesus Catholic Mission in Forest Park in the Metropolitan Archdiocese of Atlanta.

HE Mons. Jacques E. Fabre, CS was born on November 13, 1955 in Port-au-Prince (Haiti). Emigrated to New York City, he attended Saint John’s University in Jamaica (New York) and Saint Michael’s College in Toronto (Canada). After joining the Congregation of the Missionaries of St. Charles (Scalabrinian), he completed his ecclesiastical studies at the Catholic Theological Union in Chicago (Illinois). Later he studied at the Pontifical Urbaniana University , obtaining a Licentiate in Human Mobility (2004-2006). 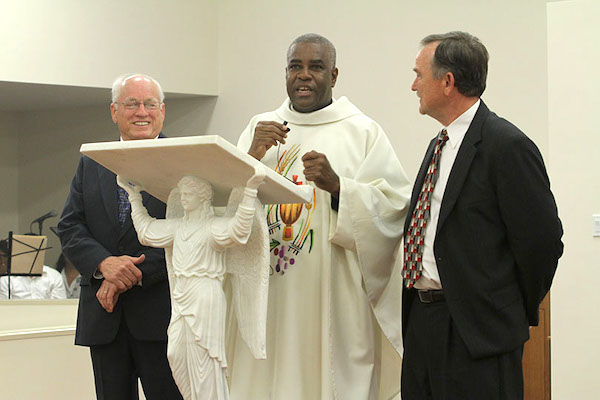 He was ordained a priest on 10 October 1986 in the Diocese of Brooklyn for the Scalabrinians.

He has held the following positions: Parish Vicar of Our Lady of Guadalupe Parish in Immokalee, Florida (1986-1990); Refugee chaplain in Guantanámo, Cuba (1990-1991); Pastor of San Pedro de Macoris Parish in the Dominican Republic (1991-2004); Parish Vicar of Saint Joseph Parish in Athens, Georgia (2006-2008) and of Holy Trinity Parish in Peachtree City, Florida (2008-2010). From 2010 up to now he has been Administrator of the San Felipe de Jesus Catholic Mission in Forest Park in the Metropolitan Archdiocese of Atlanta.

Since 2010, Bishop-elect Fabre has also served as a member of the Archdiocese of Atlanta’s Finance Council, the Budget and Operations Committee, the Projects Review Committee, and as Director and Spiritual Director to the Hispanic Charismatic Renewal. He is fluent in English, Spanish, Italian, French, and Creole.