Meet me in St. Louis: the new Archbishop Mitch Rozanski, son of Baltimore

This is a nice profile of the new archbishop of St. Louis, Mitchell Rozanski, from the Catholic Review of Baltimore:

Archbishop Rozanski’s Baltimore roots run deep, and they have grounded his ministry with a distinctive focus on pastoral outreach, dialogue, charity and openness.

Archbishop Rozanski, 62, grew up in Holy Rosary Parish in Fells Point before his family moved to Dundalk and attended Sacred Heart of Mary in Graceland Park. The son of a Bethlehem Steel police officer who also worked as a security guard at Allied Signal, the future bishop was educated by the Felician Sisters at Holy Rosary School and the Sisters of the Holy Family of Nazareth at Sacred Heart of Mary School.

Archbishop Rozanski graduated from Our Lady of Mount Carmel High School in Essex in 1976, where he had been president of the student government and was influenced by the Franciscan Sisters of Philadelphia who staffed the school.

Jean Rozanski said her son first expressed an interest in the priesthood around age 15. He had the full support of his parents, with her husband telling the future bishop that if he ever decided the seminary was not for him, he could come home any time.

After his priestly ordination in 1984 by Archbishop William D. Borders, Archbishop Rozanski served as a parish priest before being named an auxiliary bishop of Baltimore in 2004 – the youngest American bishop of that time – and then bishop of the Diocese of Springfield, Mass., in 2014.

“I think he touches many people’s lives,” said Jean Rozanski, noting that because her husband had a stroke, they could not be with their son in person for his installation. Archbishop Rozanski’s younger brothers, Kenneth and Albert, and two of his nephews, Kyle, 21, and Dalton, 15, represented the family at the installation, she said.

“He’s very down-to-earth,” she said. “He’s a good listener and he really tries to help everyone.”

Father Proffitt, director of clergy personnel for the Archdiocese of Baltimore, noted that before his friend was ordained a bishop, he was a parish priest “through and through.”

“He smells like the sheep, to employ Pope Francis’ phrase,” Father Proffitt said. “The people of St. Louis can expect to see him actively engaged, not shepherding from a distance.”

Father Proffitt said Archbishop Rozanski “delivered a homerun” in his installation homily, during which the archbishop pointed to the famous St. Louis Gateway Arch as an important symbol of openness.

“We ourselves must be gateways, not gatekeepers; gateways to healing, to evangelization, to mercy, to compassion; gateways to listening with the ears of Jesus,” Archbishop Rozanski said in his homily.

I enjoyed meeting him a few years ago, when he was the bishop of Springfield, Massachusetts. We were in Portland, Maine, where I was speaking at the installation of new members of the Order of the Holy Sepulcher. We sat together at lunch and swapped stories about Maryland. He’s the real deal: delightful, down-to-earth, and still carrying traces of that distinctive Bal’mer twang in his voice. 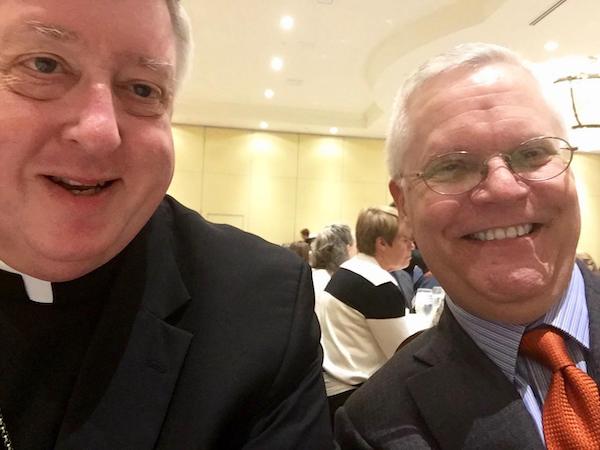