From CNN, via the Global Sisters Report:

Coronavirus spread so quickly through a convent in Michigan that it claimed the lives of 12 sisters in one month, beginning on Good Friday.

They were all members of the Felician Sisters convent in Livonia, outside of Detroit, ranging in ages from 69 to 99, the executive director for mission advancement, Suzanne English, confirmed to CNN on Tuesday. A 13th sister initially survived the virus but passed away from its effects in June.

The sisters were long-time members of the convent and leave behind a legacy of service, according to their obituaries supplied by English. They all served others through different roles, from teaching to helping at-risk children to playing music to publishing a 586-page book about the history of the convent.

“We grieve for each of our sisters who has passed during the time of the pandemic throughout the province, and we greatly appreciate all of those who are holding us in prayer and supporting us in a number of ways,” said Sister Mary Christopher Moore, provincial minister of Our Lady of Hope Province.

The women all lived and worked on the 360-acre campus that was once home to 800 sisters, according to the Global Sisters Report, an independent, non-profit Catholic news publisher. Now, only around 50 reside there, according to English.

English said the Livonia convent is one of 60 convents in the US and Canada, plus a mission in Haiti, where the 469 Felician Sisters of North America reside.

The Global Sisters Report said the death of the 13 sisters in Livonia may be the worst loss of life to a community of religious women in the US since the 1918 influenza pandemic.

From NCR and reporter Dan Stockman:

All aspects of community are still either prohibited or severely limited. Sisters could not attend the funerals. There are limits on the number of people allowed in the chapel. They cannot enter each other’s rooms. They had been eating one sister to a table, dining in three different shifts.

As of July 6, they are back to two to a table. But all the other restrictions still apply.

The community had 65 sisters before the pandemic. Now, the remaining sisters fear the day they can be together as a group and see how many are no longer there.

“I get chills thinking about that,” said Sr. Mary Andrew Budinski, the superior of the Livonia convent. “The raw grief is yet to come, I think.”

The ordeal needs to be discussed and people need to tell their stories, she said, but it’s difficult because they still cannot be together.

“That grieving and mourning and talking — we’ve got to keep talking about it and sharing about it in any way we can,” Sister Noel Marie said. “I tell them, ‘Each of you has your own personal story and our communal story, and all those need to come out.’ ”

Sister Serra, who, like Sister Mary Ann, was sick from mid-April until the end of May, said she found comfort in her faith.

“I had this image of the Good Shepherd; you know, the image where he’s carrying the sheep on his shoulders,” she said. “Only he was carrying each of our sisters. And I knew then everything was going to be all right.

Eternal rest grant unto them, O Lord, and let perpetual light shine upon them…

Meanwhile, the Catholic Foundation of Michigan has set up a support fund for the sisters. Learn more about it. 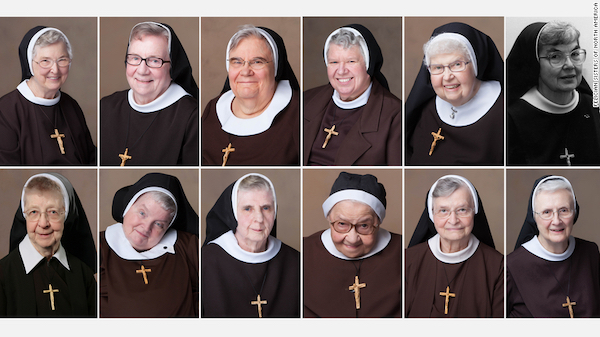