From The Los Angeles Times:

A massive fire ripped through the 249-year-old San Gabriel Mission early Saturday, destroying the roof of the church and much of its interior, authorities said.

Authorities received a call at 4:24 a.m. reporting that the mission’s fire alarm had been triggered, Negrete said. When an engine arrived to investigate, firefighters saw flames and smoke coming from the corner of the mission.

More units arrived on scene, and firefighters mounted an aggressive attack, fighting the flames from inside the church building. But after about 15 minutes, portions of the structure started to fall on them and they made the decision to exit and move to a defensive attack, battling the fire from outside, Negrete said.

The fire was eventually called to four alarms, drawing 50 firefighters from the San Gabriel Fire Department and other agencies. They were able to knock down the fire at 6:48 a.m. No injuries were reported, but the damage to the building was extensive.

“The roof of the mission is completely gone and the interior up to the altar is completely destroyed,” Negrete said. The bell tower and museum remained intact, he said.

There was no word on a cause Saturday morning, as fire investigators were not immediately able to enter the building due to concerns about its structural integrity. 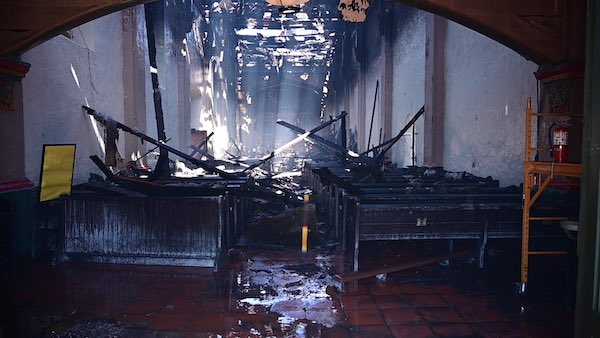 It’s worth noting: the statue of St. Junipera Serra that stood outside the mission was removed and put inside for safe-keeping. A statement on the parish website explains:

In light of the toppling of statues of St. Junipero Serra by activists across California in recent days, Mission San Gabriel has decided to relocate the bronze statue of Fr. Serra, which has stood outside the Mission church entrance since the 1980s, to a more appropriate location, out of public view. This decision was made after consultation with the Archdiocese of Los Angeles and local and Archdiocesan representatives of the Native American community. Whereas the California Catholic Conference of Bishops reminds us that the historical truth is that St. Serra repeatedly pressed the Spanish authorities for better treatment of the Native American community, we recognize and understand that for some he has become a symbol of the dehumanization of the Native American community. We at Mission San Gabriel are committed to continuing dialogue with our Native American representatives in order to achieve a peaceful and just partnership.

The founding of the Mission San Gabriel Archangel dates from the decision of Padre Serra to find an establishment midway between San Diego and San Carlos Borromeo.  Thus, the fourth Mission had its beginning on September 8, 1771, near the present city of Montebello.  The selection of the site was fortunate, for it enabled the Mission to become one of the most affluent of all those in Alta California.

The Mission, built of stone, brick, and mortar, is one of the best-preserved of all the Mission, with its picturesque buttresses and lofty walls.  Originally, the church had an arched roof, but an earthquake in 1804 damaged the building so much that the arches had to be torn down and a new roof substituted.  In 1812, another earthquake demolished the bell tower and was replaced by a campanile at the other end of the church.  Its massive strength is due to the basic, but effective, engineering skills of the early builders.  In the tower are six bells of heavy design dating from 1795 to the 1830’s.

The altar is original and was handcrafted in Mexico City, and brought to the Mission in the 1790’s.  The six polychrome wooden statues were hand carved in Spain, and they were brought around the Horn in 1791.  These statues and reredos  (ornamental screen covering at back of a church’s altar) were restored to their original beauty after the earthquake of 1987.  Also, Our Lady of Sorrows, well over 300 years old, now is beautifully framed in wrought iron.

Within the Mission is the baptistery.  The floor, walls and domed ceiling are original.  Here rests the hand hammered copper baptismal font, which was a personal gift from King Carlos III of Spain.  Also, is the same sterling silver baptismal shell carried by the founding fathers over 200 years ago, from which in November 1771, the first Tongva child received Baptism, just as the latest first born of today’s parishioners do.