In September 1967, the native New Yorker, Father Vincent Capodanno — a Maryknoll priest known as “The Grunt Padre” — was wounded in Vietnam, but heroically and selflessly continued administering the last rites until he was killed by machine gun fire. (Details below.) For several years, people in the military and around the country have tried to advance his cause for sainthood.

This week, the Father Capodanno Guild released this news:

The next step in the process for Father Capodanno’s Canonization has been for the Theological Consultants to examine Father Vincent’s Positio.  This review was planned for mid-May, and was completed as scheduled.

Unfortunately, the Theological Consultants have voted to recommend that the Cause should be suspended. While this is not what we have been praying for, it is not the end of our journey. Archbishop Broglio will be working with our Postulator, Dr. Gori, to lodge an appeal to the Congregation.

The Guild will do its best to share what we understand, but the situation is developing rapidly. As it develops, things will change. When you discuss this, please indicate the preliminary nature of this information.

The Theological Consultants are making a recommendation to the leaders of the Congregation for the Causes of Saints. They do not have the final say for our Cause.

Because they do not have the final say, there is an opportunity for us to appeal.

Among the concerns mentioned:

If you are unfamiliar with Father Capodanno’s life, here’s a good overview, which includes this citation for his Medal of Honor:

In response to reports that the 2d Platoon of M Company was in danger of being overrun by a massed enemy assaulting force, Lt. Capodanno left the relative safety of the company command post and ran through an open area raked with fire, directly to the beleaguered platoon.

Disregarding the intense enemy small-arms, automatic-weapons, and mortar fire, he moved about the battlefield administering last rites to the dying and giving medical aid to the wounded.

When an exploding mortar round inflicted painful multiple wounds to his arms and legs, and severed a portion of his right hand, he steadfastly refused all medical aid. Instead, he directed the corpsmen to help their wounded comrades and, with calm vigor, continued to move about the battlefield as he provided encouragement by voice and example to the valiant Marines.

Upon encountering a wounded corpsman in the direct line of fire of an enemy machine gunner positioned approximately 15 yards away, Lt. Capodanno rushed a daring attempt to aid and assist the mortally wounded corpsman. At that instant, only inches from his goal, he was struck down by a burst of machine gun fire.

By his heroic conduct on the battlefield, and his inspiring example, Lt. Capodanno upheld the finest traditions of the U.S. Naval Service. He gallantly gave his life in the cause of freedom.

Please take this opportunity to pray for all who serve in the military — and pray that if it be God’s will, this cause can continue.

God of peace, You who weep
at the violence and wars between your children,
help us to walk in the footsteps of your Son.
In our darkest hour be our light
and show us the way to help those in greatest need.
Draw to Yourself those innocent victims who
find themselves surrounded by danger and destruction.
Hear the prayers of all who cry out to you for deliverance.
Through the intercession of Vincent Capodanno, Servant of God,
grant strength to the weak, courage to the fearful
and hope to those who mourn.
Above all, direct our hands this day to reach out and comfort
all who yearn for the coming of Your kingdom on earth. 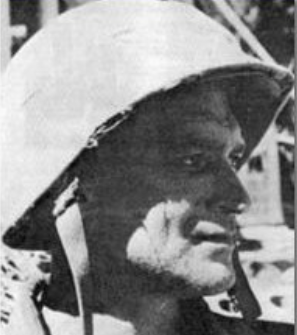