The news began circulating last night. CNA reports he is the first Catholic priest in the U.S. known to have died of the virus.

I can’t believe this. Just got word that Fr. Jorge Ortiz has passed away from COVID-19. May God be good to him. Brother, may the angels take you to paradise, upon your arrival the martyrs receive you and introduce you into the Holy City of Jerusalem. I am sure that our Morena is waiting for you at the door of heaven, to welcome you into the eternal kingdom and thanking you for your tireless efforts promoting devotion to her, and for giving your life to her Son as a priest. We will miss you terribly, my friend.

He was the pastor at St. Brigid’s in Brooklyn. His biography from the parish website:

Father Jorge Ortiz-Garay was born in Mexico City. He is the son of Jorge Ortiz and Estela Garay. He is the second oldest child in a family of five siblings (Maria, Jorge, Marcial, Edgar and Irais). When he was a child, he studied under the direction of Benedictine monks. He finished his professional studies at The Legion of Christ in Mexico, a clerical religious Institute of pontifical right, earning his degree in law. At age 18, he joined the communities of the Neocatechumenal Way. It was through the involvement with this group that he felt his calling for the priesthood. 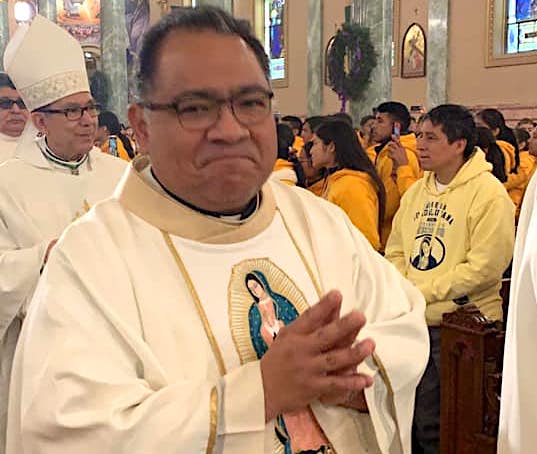 A short time after finishing his studies and then after working as a lawyer, Father Ortiz contemplated his calling. He spent time reflecting, pondering, and scrutinizing his calling, to which he responded to God with a Yes.” In September of 1996, he left his family, friends, and country to start this adventure in Italy. He enrolled in the seminary of Diocesano Misionero Redemptoris Mater, and from there he was sent to continue his Studies in Kearney, NJ. He completed his Studies in Theology at Seton Hall University. On May 29th, 2004, he was ordained priest at Sacred Heart Cathedral, by his Excellence John Joseph Myers, Archbishop of Newark.

Father Jorge Ortiz was sent to serve as a vicar at St. Maria Church in Plainfield, NJ. In 2009, Archbishop Myers sent him on a new mission started by Bishop DiMarzio here in the diocese of Brooklyn/Queens as the vicar for the Co-Cathedral of St. Joseph while also serving as the Chaplain for the mission ad gentes in Brooklyn. In 2014, Fr. Ortiz was appointed to the parish of St. Brigid.