As Rome begins to consider the evidence that’s been collected for her cause, a leading authority on Dorothy Day’s life, Robert Ellsberg, weighs in:

There are those who fear that canonization will inevitably reduce her radical commitment to peace and justice in favor of some innocuous piety. (They cite statements by conservative prelates that seem to point in that direction.) Yet, I believe that Day’s writings speak for themselves. Having just edited her writings from the ’60s and ’70s, I am confident there is no way to diminish her radical critique of the capitalist system, her bold solidarity with the poor and oppressed, or her revolutionary commitment to gospel nonviolence. By the same token, there is no doubting the deep spirituality that underlays her witness and her activism. As Pope Francis observed, that witness was rooted in her reading of the gospels and her study of the lives of the saints.

But didn’t she say: “Don’t call me a saint; I don’t want to be dismissed that easily”? If that sentence is among the most famous things she supposedly said, I have no one to blame but myself; I cited it in the introduction to my 1983 edition of her selected writings. Whatever the provenance of this famous “quote,” the important question is: What did it mean?

“As she once said to me, ‘When they call you a saint, it means basically that you aren’t to be taken seriously.'”

Certainly, I never knew anyone with more devotion to saints than Day. She didn’t just venerate them—she tried to emulate them. They inspired her on her own quest for holiness, a vocation, she believed, that was shared by all Christians. What she objected to was being idealized, put safely on a pedestal, where her example posed no challenge to “ordinary” people. She knew that for most people, “saints” were perfect people; no one could be expected to follow their example. As she once said to me, “When they call you a saint, it means basically that you aren’t to be taken seriously.”

For Day, to be a saint meant taking Christ seriously. And that she certainly did: as a lay woman, as the leader of an apostolic movement, whose solidarity with the poor, resistance to a system that diminished human dignity and freedom, promotion of the gospel message of peace and concern for the earth, put her far in advance of church teachings in her time. Today, her stance is remarkably aligned with the agenda of Pope Francis.

Dorothy Day, pray for us! 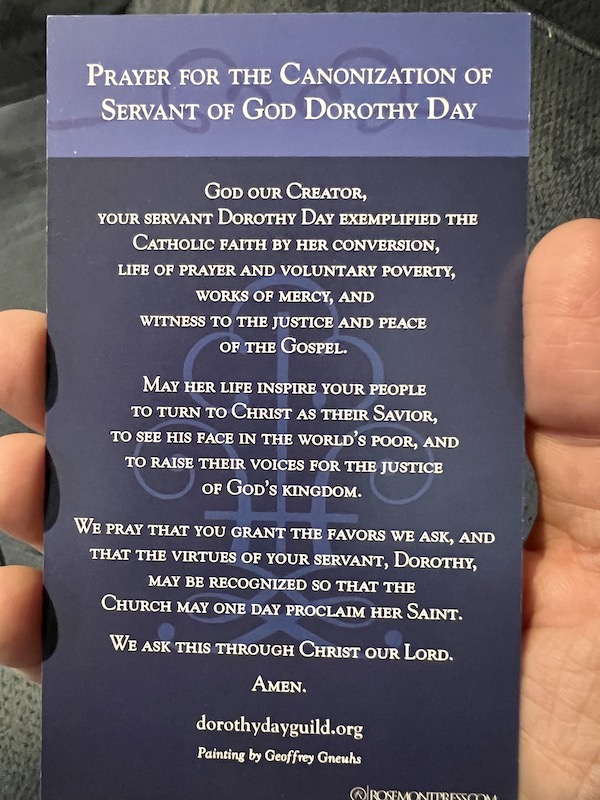