A diaconal connection to the funeral of Cardinal Pell

Reading about the funeral of Cardinal George Pell in St. Peter’s Basilica on Saturday, I saw this photograph: 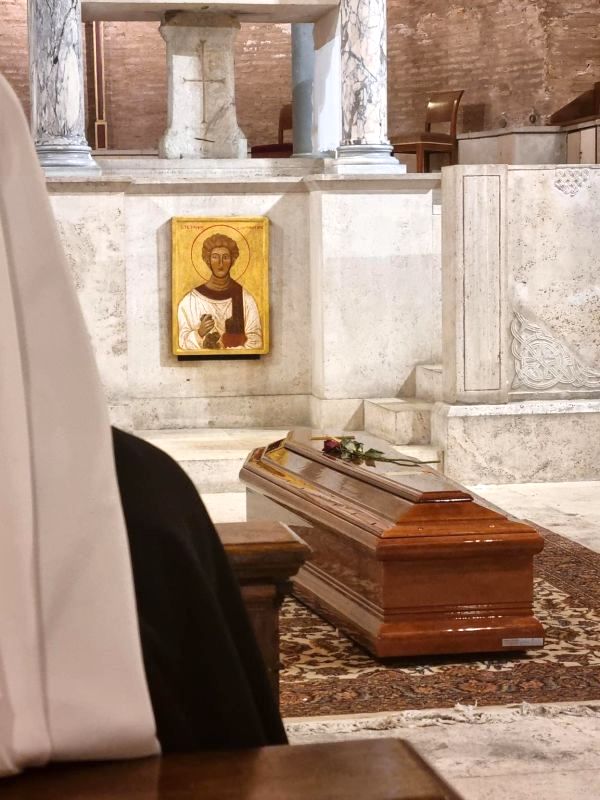 I thought the icon might be of St. Stephen, and it was — subtly connecting the late cardinal’s legacy to both service and to martyrdom.

The picture was from Friday:

The day before his funeral, a visitation was held for Pell in the Church of Santo Stefano degli Abissini inside the Vatican.

St Stephen of the Abyssinians (Italian: Santo Stefano degli Abissini) is an Ethiopian Catholic church located in Vatican City. The church dedicated to Stephen the Protomartyr is the national church of Ethiopia. The liturgy is celebrated according to the Alexandrian rite of the Ethiopian Catholic Church. It is one of the only standing structures in the Vatican to survive the destruction of Old St. Peter’s Basilica (c. 1505), and thus it is the oldest surviving church (in terms of architectural history) in Vatican City.

Meanwhile, here’s more about the cardinal’s funeral, from Vatican News:

In his homily at the funeral, the Dean of the College of Cardinals, Cardinal Giovanni Battista Re, recalled that “the unexpected end of Cardinal George Pell’s earthly life took us all by surprise.”

The late Australian-born Cardinal “was present with us to concelebrate the funeral Mass for Pope Emeritus Benedict XVI on the parvis of the Basilica and, despite his 81 years, he seemed in good health.”

Cardinal Re then recalled that the last years of the late Cardinal Pell’s life “were marked by an unjust and painful condemnation.”

“In June 2017, he was accused of sexual abuse in Australia, and the trial resulted in a prison sentence,” he said. “Cardinal Pell spent 404 days in the cells of two maximum security prisons, in Melbourne and then in Barwon, including a period of solitary confinement.”

Then, noted the Cardinal Dean, the Australian High Court exonerated Cardinal Pell in April 2020 by overturning the guilty verdict.

“His was an experience of great suffering endured with confidence in God’s judgment,” said Cardinal Re, saying it offered an example of how to accept even unjust punishments with dignity and inner peace.

Faith and prayer, added the Cardinal Dean, were of great comfort and support to Cardinal Pell during that difficult time.

“In order to make known how much faith and prayer assist us in the difficult moments of life and also to support those who must unjustly suffer,” said Cardinal Re, “he published a diary written during his long days in prison.”

Finally, Cardinal Re emphasized that the late Cardinal Pell was a “man of God and man of the Church characterized by a deep faith and great steadfastness of doctrine, which he always defended without hesitation and with courage, concerned only with being faithful to Christ.”

At the conclusion of the Eucharistic celebration, Pope Francis presided over the rites of the Ultima Commendatio and Valedictio.