A little news this morning about a native Marylander, from the Vatican:

The Holy Father accepted the renunciation of the pastoral government of the Metropolitan Archdiocese of Saint Louis (USA), presented by HE Msgr. Robert J. Carlson.

The Holy Father has appointed Archbishop Mitchell T. Rozanski, until now Bishop of Springfield in Massachusetts, as Metropolitan Archbishop of Saint Louis (USA).

HE Msgr. Mitchell Thomas Rozanski was born on August 6, 1958 in Baltimore (Maryland) in the Archdiocese of the same name. He attended Sacred Heart of Mary primary school in Baltimore, and Our Lady of Mount Carmel High School secondary school in Essex. He completed his studies in Philosophy and Theology at the Theological College of the Catholic University of America in Washington (1978-1984).

He was ordained a priest for the Archdiocese of Baltimore on November 24, 1984.

After priestly ordination, he held the following positions: Parish Vicar of Saint Michael Parish in Overlea (1984-1986), Saint Anthony of Padua Parish in Baltimore (1986-1990), Parish priest of Saint Isaac Jogues Parish in Baltimore (1990 -1993) and of the twin parishes Holy Cross and Saint Mary Star of the Sea Parishes in Baltimore (1993-2000) and of the Saint John the Evangelist Parish in Severna Park (2000-2004). He was also Vicar Forane in Anne Arundel County and Member of the College of Consultors, of the Presbyteral Council, of the Archdiocesan Committee for Vocations, of the Priest Personnel Board, the Clergy Permanent Formation Committee and the Lay Formation Committee. He was Vicar for Hispanic Ministers in Baltimore.

Appointed titular bishop of Walla Walla and auxiliary of Baltimore on 3 July 2004, he was consecrated on the following 24 August.

He was transferred to the Springfield headquarters in Massachusetts on June 19, 2014 and took office on August 12, 2014.

Within the Episcopal Conference he is a Member of the Committee on Ecumenical and Interreligious Affairs.

I had the pleasure of sharing a table with Bishop Mitch during a memorable weekend with the Order of the Holy Sepulchre in Portland, Maine, a a few years back. We talked about crabs and Bal’mer and other Maryland things. We both miss Haussner’s, hon.  Ad multos annos! 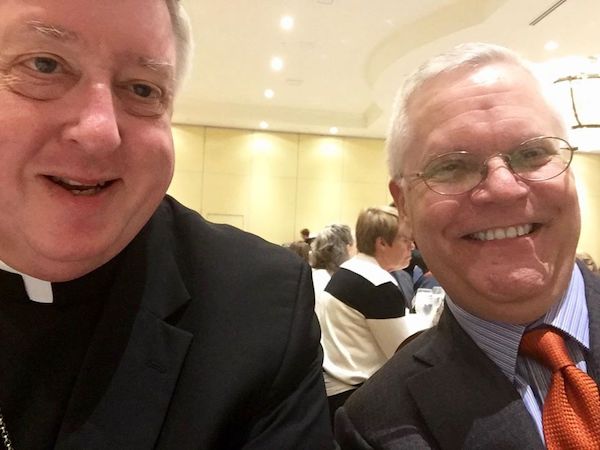