Dear Post Office: What happened to the stamps this year?

As the mail piles up during the holidays, I don’t know how many others have noticed this. But the United States Postal Service decided not to issue religious holiday stamps this year. I always look forward to this little addition to my cards and was wondering when they would drop. They didn’t.

There are new secular stamps for the season.  This one features various scenes depicting “A Visit from St. Nick.”

And these, showing otters in snow. 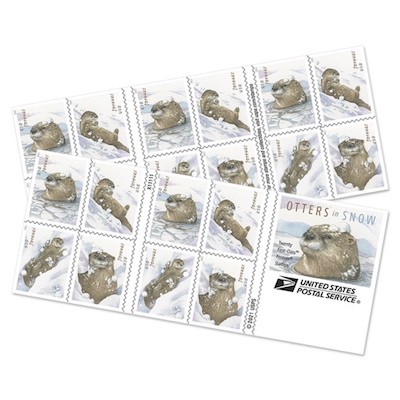 But the Christmas, Hanukkah and Kwanza stamps are all repeats of the 2020 stamps.

What’s up with that?

I was happy to see the U.S. Postal Service offered a little religious history when they unveiled the Santa stamps back in October:

St. Nick — Santa Claus — is one of our most recognized and beloved cultural icons. His jolly laugh and smiling eyes are a happy reminder that Christmas is near.

European immigrants brought to their new country folk characters that over the years became our present-day Santa Claus. One of those characters was Sinterklaas, a folk version of the real-life St. Nicholas of Myra, a third-century bishop, whose feast day became associated with stories of his generosity. Sinterklaas delivered presents on Dec. 5, the eve of the saint’s feast day. In an 1809 satire, American author Washington Irving described a St. Nick who appeared in a dream, portraying him traveling in a flying wagon. A few years later, in 1821, the illustrations accompanying the poem “The Children’s Friend” further embellished the legend with “Santeclaus” arriving in a sleigh drawn by a reindeer.

In 1823, the anonymous publication of the poem “A Visit from St. Nicholas,” perhaps better known as “The Night Before Christmas,” helped to shape much of our modern mythology of the holiday. The poem has St. Nicholas making his journey in a sleigh pulled by eight flying reindeer, each of them carefully called by name. Dressed in fur — with twinkling eyes, rosy cheeks and dimples — St. Nick visits each home to fill children’s stockings with presents. He is described as a merry, plump elf — very different from the original rather somber bishop.

Santa was portrayed in all manner of guises during the 19th century: thin, fat, old or young; an elf or a human; and clothed in anything from long robes to a one-piece undergarment called a union suit, in colors of blue, red, green or purple. Even as illustrators popularized visual images of Santa, they were rarely consistent. However, cartoonist Thomas Nast’s portrait of the white-bearded Santa in his red suit would emerge as the version we are most familiar with today.

But there’s no mention of why other new stamps — ones more overtly religious — weren’t issued for 2021.

I decided to write to Sara Martin, Senior Public Relations Representative for the United States Postal Service, and ask her what happened.

She wrote me back:

The Postal Service rotates new stamp issues for the holiday celebrations. Reissues of holiday stamps are standard practice. The Kwanza stamp, for example is currently available in the Postal Store in its 2018 and 2020 versions. All stamps are kept in our inventory and available for purchase until the supply has been depleted. Inventory in different post office locations may vary, but since these are issued as Forever stamps, they are always valued at as First Class 1-ounce postage so they can be used from one year to the next.

So: maybe better luck next year.

UPDATE: I discovered some interesting history about the USPS Christmas stamps on their website. The first stamp for the holiday was issued in 1962:

The first Christmas stamp — featuring a wreath, two candles and the words “Christmas 1962” — was issued in Pittsburgh, at the annual convention of the National Association of Postmasters, on Nov. 1, 1962. At the dedication ceremony, Day stated it was the most-demanded stamp of any ever issued and that it would be the first in a series of annual Christmas stamps.

Anticipating a huge demand for the new stamp, the Department initially ordered 500 million printed — the largest number produced for a special stamp until that time. But demand for the stamp exceeded expectations. Thousands of Post Offices sold out, some within hours of placing them on sale. By the end of November, the Department upped the printing order to 650 million, and printers at the Bureau of Engraving and Printing began working around the clock to try to keep up with demand. By the time the presses stopped on Dec. 15, nearly 862 million of the stamps had been printed and distributed. James Kelleher, special assistant to the postmaster general, called it “far and away the best-selling special stamp ever issued.”

Despite their popularity, Christmas-themed stamps were not without controversy. Some people thought they were too religious, blurring the separation between church and state. Some thought the stamp designs weren’t religious enough. In an attempt to minimize controversy, for the first few years the Post Office Department issued Christmas stamps with only nonreligious designs, featuring holiday greenery. Critics complained that by omitting the “reason for the season” the Department was commercializing Christmas.

The design of the 1966 and 1967 Christmas stamps — the first to feature the Madonna and Child — sparked even more controversy. In 1966, a representative of the American Jewish Congress urged the postmaster general not to issue the stamp. In 1967, Protestants and Other Americans United for Separation of Church and State sued Postmaster General Lawrence O’Brien, complaining that “the likeness of the Madonna is a religious symbol commonly associated with the Roman Catholic Church; and that, therefore, for the Government to issue such a postage stamp violates the First Amendment to the Constitution.” A federal judge dismissed the complaint, finding that the plaintiffs had no standing to sue.

In November 1970, the Postal Service first issued dual Christmas stamps — a “traditional” stamp with a religious theme and a “contemporary” stamp with a secular theme. Both traditional and contemporary holiday stamps have been issued regularly since then, giving customers greater choice when mailing holiday greetings. The traditional stamp has usually featured a famous painting of the Madonna and Child; for example, the Niccolini-Cowper Madonna by Raphael, issued in 1983 (below, far left), and Ignacio Chacon’s Madonna and Child with Bird, featured in 2006 (below, far right). Popular subjects of contemporary Christmas stamps have included toys, holiday decorations and Santa Claus.

In a few years — for example, in 1974 and 1995 — more than two Christmas stamps have been issued. In 2000, no new Christmas stamps were issued, due to a large surplus remaining from the previous year.