Writing the next chapter

Well, what do you know?

Forty years ago this month, on the Ides of March in 1982, I took the Metro to DuPont Circle in Washington, where I walked a few blocks to 2020 M Street and made my way through the glass doors at the entrance and started my first day as a Production Secretary at CBS News. I was 22-years-old, and was going to be making $11,900 a year and I thought, “Wow. I’m rich.”

I still think that. But money has nothing to do with it.

March 15, 1982, marked the start of a defining chapter of my life, which eventually led me to New York City, and the diaconate, and then another extraordinary chapter, as writer and editor for an agency of the Holy See, Catholic Near East Welfare Association.

And now a new chapter begins.

I’m leaving the world of full-time employment, and a steady paycheck, to draw a pension and devote my time to giving retreats, leading missions, speaking at conferences, writing books — and still scribbling a word or two for CNEWA. I will be a “consultant,” whatever that means, and crafting letters and appeals and brochures from home a day or two a week. I hope to continue traveling the country for CNEWA, giving pulpit talks and making parish visits to promote the agency’s work.

What I won’t be doing: golfing or sipping drinks with little umbrellas in them.

I know: I’m young to be doing this. And that’s one of the reasons I’m doing it.

Last summer, when I found myself in Alabama being interviewed on EWTN, I spent a memorable evening sharing a beer with Fr. Mitch Pacwa. I asked him how his career as a speaker and retreat master was going. “It’s been slow,” he said, “because of COVID. But it’s starting to pick up again.” Then he added: “I’m sort of glad it’s been slow. I’m 72. It’s harder to do this at 72 than at 62.”

I let his soundbite sink in. It confirmed something I’d been thinking about for a while.

The two years of COVID and lockdown and sickness and death have taken a toll on all of us — in New York City, it’s been especially fierce. Just two miles from my living room is Elmhurst Hospital in Queens, the “Ground Zero of Ground Zero” for the pandemic. The stories I heard were horrifying. They’d brought in refrigerated trucks and put them in the parking lot of the hospital to contain the bodies, because there was no more room in the morgue. Funeral parlors were overwhelmed. They couldn’t keep up. Dozens upon dozens of bodies kept arriving.

In the first several weeks, we lost a dozen clergy, priests and deacons, in my diocese alone. New questions gnawed at me. What if this is it? What if I got COVID, but survived only to be debilitated by disease? What if I had only a few weeks left to live? What have I done with my time and talent?  What have I failed to do?

How would I feel about my life?

I was also haunted by history. In 1983, when my father was just a year older than I am now, he suffered a massive stroke and spent the rest of his life in a diaper, in a wheelchair, in a nursing home.

All of this just wore me down. Then there were the regular reminders from my sister, whose husband had died suddenly one Saturday morning in 2019 of a heart attack. He was 68.  My sister became the Greek chorus of my life in lockdown. “Don’t put anything off,” she kept telling me (and anyone else who would listen) in phone calls and emails. “You never know how much time you have. Don’t wait.”

I knew she was right. So here I am, starting something new, putting out into the deep. I’m blessed to be able to do this now, at this moment in my life, when I’m young (sort of) and healthy (mostly) and still have my wits about me (well, that’s debatable.)

For now, I have a lot to keep me busy.

The next few weeks will be a whirlwind. This weekend, I have a parish mission in Ohio; after that, I head to the Catholic Theological Union in Chicago for a homiletics project I’m involved with; then it’s on to Anaheim and the LA Religious Ed Congress, where I’m giving a talk on the diaconate; after that, there’s a parish mission in New Jersey. And then, of course, Easter.  (Our parish administrator told me if I keep this up, he’s going to take my name off  the parish bulletin. He was joking. I think.)

I have a new book coming out in April and a proposal for the next one is percolating.

That’s just in the next several weeks. There’s more to come. I’ll be keeping up with my parish ministry and I hope to be available for more. We’ll see what God has planned. (And for those who have asked, this blog will keep chugging along as usual, and so will my Patreon page!)

So maybe even “semi-retired” isn’t accurate. I’m just what I’ve always been: an ordinary working guy of average intelligence who managed to graduate from a decent state school and can type 90 words a minute (as I keep telling people, that’s my one marketable skill.) I’ve been fortunate to be in the right place at the right time, again and again, working with the right people, who were generous with their wisdom,  their good humor and, more than once, their forgiveness and forbearance. (It doesn’t hurt that I’m married to a saint, who spends endless hours praying for her slow-witted husband, and loves him anyway. I do think that counts for something.)

What comes next? This morning, the page is blank. The rest of the story is waiting to be told. 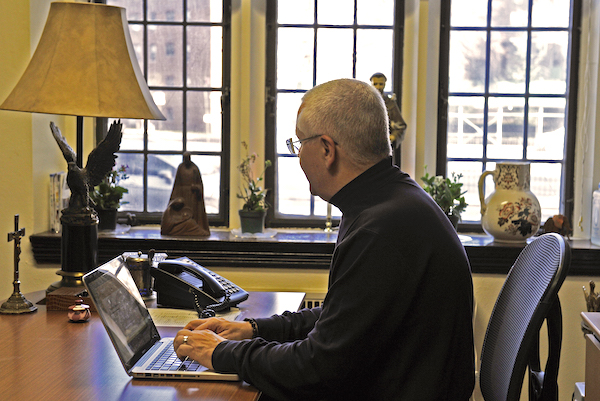