In 2019, the New York Times did something remarkable and unexpected: it ran a series of stories about people joining the Catholic Church that Easter.

One of them was a woman named Joanna Huang. The story said that many people who saw her at Mass on Sunday at her parish in New Jersey assumed she was already Catholic. But she wasn’t.

It turned out that Joanna had promised her husband that she would raise their daughters Catholic. When her marriage broke up, and she got divorced, she kept her promise — taking the girls to church every week.

After years of her daughters telling her she should get baptized, she finally agreed. When she joined the Church in 2019, her teenage daughters served as her sponsors.

It was a gradual process, she told the Times. But looking back on it, she was grateful, and a little bit amazed. She didn’t know why or how it happened. But the timing just seemed right.

She said: “I figured it was part of God’s plan.”

Every new Christian has a story, a history, a reason for making this journey. I know that’s true of the catechumens and candidate who are here this morning.

Somehow, God has been at work in their lives. And as a result, nothing can ever be quite the same.

That’s one of the threads that has run through the Gospel readings over the last three Sundays.

If you’ve been here at this 9 a.m. Mass during these weeks, you’ve heard a different Gospel than at other Masses, hearing long and detailed miracle stories from the Gospel of John.

They describe how Jesus transformed the lives of three individuals in dramatic ways.

First, there was the woman at the well, who heard Jesus speak about her life, reached a new awareness about it, and then had to tell others.

Then, there was the man born blind — who because of Jesus was finally able to see. Christ gave him clarity and vision and light.

And today there is Lazarus, who received from Jesus the incomparable gift of new life.

On the one hand, these remarkable episodes speak beautifully to the experience of those who are joining the Church in just two weeks. These stories describe how an encounter with Christ changes everything.

But in another sense, these stories speak to every one of us this morning. They remind us that what Christ gave to those three people, he gives to all of us.

But a question that haunts us all: what comes next?

One interesting aspect of these three Gospels is that we never find out. You never learn what happened to those whose lives were touched by Jesus. We never hear, as Paul Harvey would say, “the rest of the story.”

But there is always more. This old book in my hand reminds me of that every day.

I brought this Bible to church today. It’s old and falling apart. It’s been sitting in my office collecting dust but every now and then, I blow the dust off it and open it up. It is a Protestant edition, printed in Philadelphia many years ago. It has maps and drawings scattered throughout, and all the words of Jesus are printed in red.

It belonged to a young Methodist woman who attended a small church in New Jersey many years ago, a church where they sang “Faith of our Fathers” and “The Old Rugged Cross.” She attended camp meetings and Sunday school and she spent summers during the Depression in Ocean City, New Jersey, where they didn’t sell liquor.

The woman’s name is printed in gold on the cover: Claire Prosser.

I knew her well. Claire Prosser was my mother.

After World War II, she met and fell in love with the son of a Slovak coal miner from Pennsylvania, my father. He happened to be Catholic. So — although her mother had her doubts and concerns — she entered the Catholic church shortly before they got married, 1949. It was a journey, in every way, compelled by love and mystery and hope.

As a result, I stand before you this morning: a deacon in Queens, serving at God’s altar, speaking from this pulpit, overwhelmed at how God has worked in my life, even before I was born.

Because of the choice Claire Prosser made, I am here.

Like Joanna Huang, I see it all as part of God’s plan. 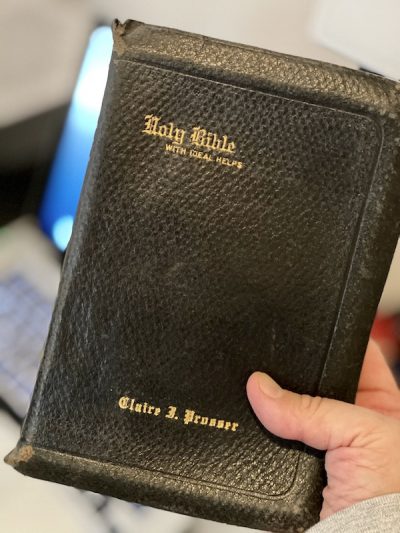 And so, I want to say to our catechumens and candidate, and to all who are here this morning: you, too, are part of God’s plan. We all are. This Bible reminds me of that. It tells me where I came from, and what I owe to those who came before me.

We don’t know “the rest of the story” of the woman at the well, or the man born blind, or Lazarus.

But part of that story, truly, is each of us. We are a part of their legacy. We are continuing what they began: retelling their stories, sharing their wonder. Passing on, literally, the Good News.

We’ve seen how an encounter with Jesus changed them.

How has it changed us? What will we give to God in gratitude for what he has given us?

What will be the rest of our story?

If we open our hearts to God working miracles in our lives, we can be like those three figures in the Gospel.

Like the woman at the well, we can be changed.

Like the blind man, our eyes can be opened.

Like Lazarus, we can be renewed and reborn by responding to the call of Christ.

Joanna Huang said it was all part of God’s plan.

As we continue to pray for those who are entering the Church this Easter, and continue our own journey in these last days of Lent, we pray as well that all of us may come to a greater understanding of God’s plan for our lives — and appreciate even more the miracle of his abiding love for each of us.

UPDATE: Below is a recording of the Mass where this homily was preached. The homily begins at 23:30