Washington, DC’s first coronavirus death is a Franciscan friar who was a deacon

A member of the Franciscan Monastery of the Holy Land in America is the first person to die of the novel coronavirus in the District, the monastery’s superior, Father Larry Dunham, confirmed Saturday.

John-Sebastian Laird-Hammond, 59, had been at the monastery since the late 1980s and had for the last 14 years run its day-to-day operations as the business manager, Dunham said. He had recently been approved for a transfer to an order in New York, where he was going to be involved in fundraising efforts for missions in Central America, Dunham added.

“It was going to be like a whole new focus and life for him,” he said. “That was to be his new assignment that never quite materialized.”

Mayor Muriel E. Bowser (D) announced the news of the first death on Friday, but did not identify Laird-Hammond by name.

D.C. officials said the person was admitted to a hospital last week with fever and cough and may have had contact with a previous patient.

Dunham said that Laird-Hammond had battled leukemia for several years. A few days ago, he said Laird-Hammond sent him a picture of a thermometer showing his temperature: 103.5 degrees.

He said that Laird-Hammond often battled nausea after his treatments for leukemia but had seemed in February to be in some of the best health Dunham had seen him in for years. He said he grew worried about a coronavirus diagnosis when he heard Laird-Hammond had been hospitalized and was shocked when he saw the picture of the thermometer.

“My knees started to buckle,” Dunham said. “I said, ‘please try to get better.’ . . . He always recovers. He always finds a way. But he didn’t find a way. That’s what I’m really trying to get my head around.”

UPDATE: A friend in Washington who has worked with the monastery, Susan Gibbs, wanted me to know that Brother John Sebastian was also a permanent deacon. To my knowledge, he’s the first deacon to succumb to the virus. Susan sent me the picture below, from the monastery’s Facebook page, showing him blessing the animals a couple years ago. She also noted that he was in charge of the Pontifical Good Friday Collection. “With so many places shutting down right now,” she wrote, if people want to do something to remember him, give to that collection.” 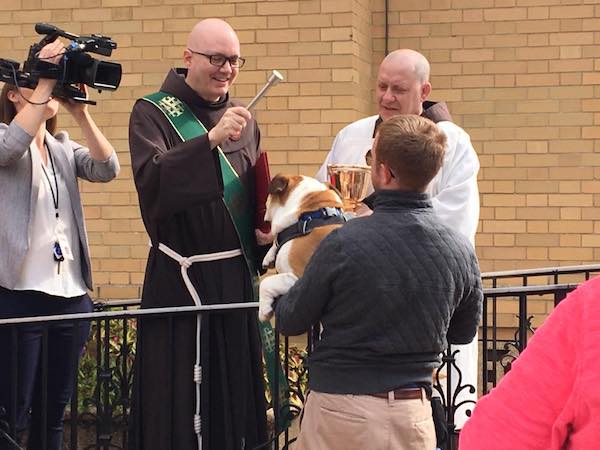 My friend Deacon Sean Keller from the Archdiocese of Baltimore knew him, and writes:

Brother John-Sebastian was a Friar and a Deacon. He served as the Business Manager at the Franciscan Monastery. I knew him through the Equestrian Order of the Holy Sepulcher of Jerusalem, of which Brother Sebastian was invested in 2017 at the Baltimore Basilica. I knew Brother Sebastian as a kindhearted, faith-filled man whose smile lit up the place. Each time I would see him, we would catch up and share what was going on in our lives and share a few laughs. He had a disarming personality and was well-liked by all who knew him. He handled his health challenges with dignity. He was in the process of transitioning to a new community. I will miss him.