I was saddened to learn over the weekend that another CBS News legend had passed: the great Charlie “Mongo” Wilson.

Charlie was an incredibly gifted editor. He made it all look easy. And he was indefatigable. Deadlines didn’t bother him. (Anyone who remembers the movie “Broadcast News” will recognize Charlie in the big blonde-haired editor Bobby — or, as Holly Hunter calls him, in a terrifying moment of pleading-on-deadline: “Bobby-bobby-bobby-bobby-bobby…”)

He was also an ace cameraman, who made his mark on history: Charlie was there with CBS News correspondent Lem Tucker when President Reagan was shot outside a Washington, D.C. hotel, and he managed to keep his camera rolling the entire time.

(Footnote: Charlie was also the still photographer for my wedding in 1986, which wasn’t nearly as historic — except, maybe, to me.)

A few years ago, I reconnected with him on Facebook, and he often chimed in on matters journalistic, political and religious. Though he wasn’t Catholic, he was curious about the faith. I wish I could have talked to him about it. He was a gentle giant, with a curious mind and a generous heart.

But what many old time TV newsies remember him for is the jaw-dropping, side-splitting video below, “The Tapes of Wrath,” which has been passed around and copied and shared so often, it should be in the Smithsonian.  (I nabbed a copy not long after it was made and my in-laws couldn’t get enough of it. Whenever they had company over, they had to show it to them after dinner.)

It’s  cobbled together from TV news outtakes, bloopers and sheer foolishness, and was shown  at the Radio-Television Correspondents Dinner in Washington in 1983. After I watched it for the first time in decades last weekend, I thought: this belongs in a time capsule. What was television news like in the early days of the Reagan era? This shows you. And, boy does it take me back. This was when CNN was known as the “Chicken Noodle Network” and FAX machines were considered state of the art and every television star had “helmet hair” and America turned on the TV every night at 6:30 to find out what had happened in the world.

This also reminds me of a time when our hearts were lighter. We could still laugh at ourselves, and have fun, and delight in the sheer craziness of the times.

Will we ever be able to do that again?

God love you, Charlie. Thank you.

The credential below, from his Facebook page, is how I will always remember him. 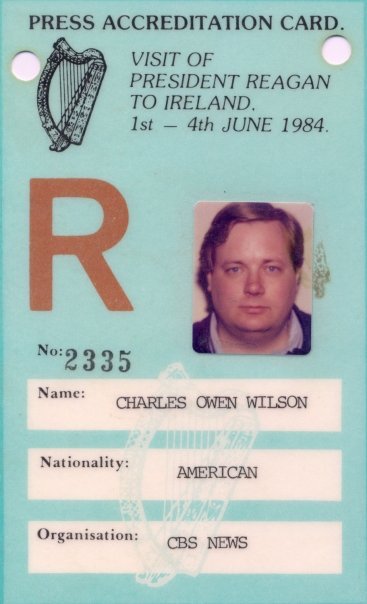