The traveling deacon: Greetings from Graymoor

Greetings from the Hudson Valley and Graymoor, home of the Franciscan Friars of the Atonement. I’m leading a retreat here this week for a group of deacons. It’s my first time traveling for a speaking engagement since February of 2020, when I spoke at the convocation for deacons in the Diocese of Charleston, SC. 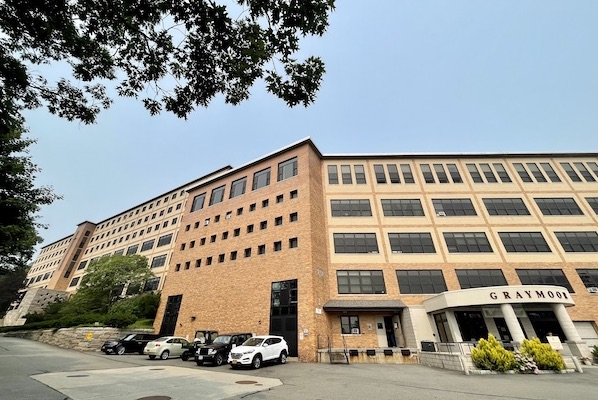 The Franciscan Friars have an illustrious history up here; the founder, Father Paul Wattson, was an Episcopal priest who later entered the Catholic Church. (He is also, not insignificantly, one of the founders of Catholic Near East Welfare Association, the papal agency were I work.) I have to say: he started something wonderful up here in the rolling hills of New York.

Father Paul was born on January 16, 1863 in Millington, Maryland, to Rev. Joseph Wattson and Mary Electa Wattson, and baptized Lewis Thomas Wattson. He was ordained as an Episcopal priest in 1886. In 1898, in collaboration with an Episcopal sister, Lurana White, he helped to found the Society of the Atonement, taking vows of Franciscan poverty, obedience and chastity at Graymoor in Garrison, NY, with the mission of promoting Christian unity.

Founder of the Franciscan Friars of the Atonement, Servant of God Father Paul of Graymoor was a true apostle of Christian Unity and charity, an ardent Franciscan, missionary of At-One-Ment and leader. His life purpose and legacy was work for the realization of Christ’s prayer at the Last Supper: “That all may be one: as thou, Father art in me, and I in thee, that they also may be one in us.” (John 17:21)

This legacy of At-One-Ment, and the example of his life and work have drawn others into the world to be bridge builders, peace makers and reconcilers.

Timothy Cardinal Dolan of the Archdiocese of New York formally opened the Cause for Canonization of Father Paul on Tuesday, September 22, 2015 in New York City. On March 9, 2017, at the New York Catholic Center, documents and artifacts illustrating the holiness of the life of Servant of God were sealed for shipment to Rome. Father Paul was an indefatigable servant of God whose work was to spread the Kingdom of God on earth. He had the heart of a Franciscan and the missionary zeal of St. Paul, as evidenced by his many publications, sermons and letters he left behind, and the Ave Maria Hour Radio Show which brought the words of the gospel and the lives of the saints into people’s homes.

The history of this spot is notable, too:

In 1875, the rector of the Episcopal Church in Garrison erected a mission church called “St. John’s in the Wilderness” about three miles from Garrison, NY. In 1893, this abandoned and deteriorated church, was named “Graymoor” by three Anglican ladies who restored it. In the same year, Fr. Paul Wattson was inspired to name the Society he was to found “The Society of the Atonement.” In 1898, Mother Lurana White and Fr. Paul sought Graymoor to become the foundation of their newly founded Society of the Atonement. In 1925, Fr. Paul wrote, “Since God has given the Friars of the Atonement so magnificent a mountain; we look upon it in the nature of a holy obligation to erect thereon monastic buildings harmonious with their surroundings.” 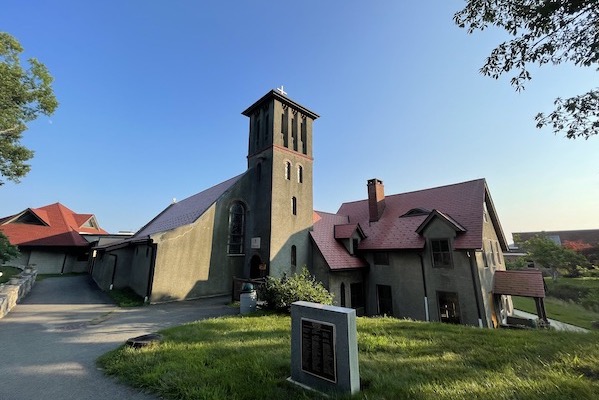 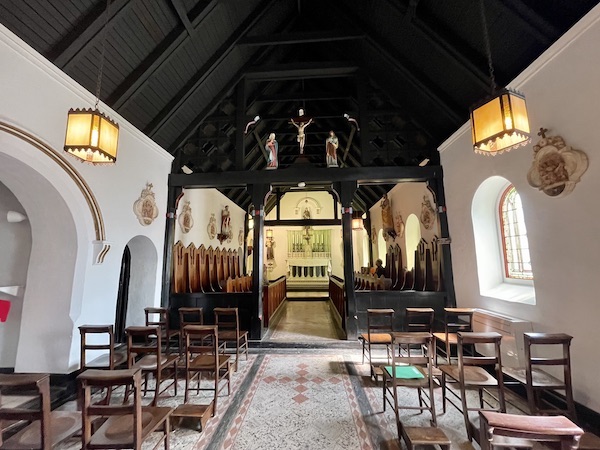 Today, Graymoor is the mother house for the Sisters of the Atonement, the Friars of the Atonement, home to the largest outdoor shrine to St. Anthony, the historic St. Francis Chapel and the men in recovery at the inpatient and outpatient treatment center of St. Christopher’s Inn. The Graymoor Spiritual Life Center has retreats year round, many of them focusing on recovery, Franciscan spirituality, liturgy and prayer.

Visitors to the grounds of Graymoor can visit the burial place of Father Paul of Graymoor, the location of the cedar Cross he fashioned and carried to the top of the mountain on the feast of the Corpus Christi in 1900, the place where he professed his vows, and the “Palace of Lady Poverty,” a paint shack where Father Paul lived upon his arrival at Graymoor in 1899, named in honor of St. Francis, who referred to evangelical poverty as Lady Poverty. 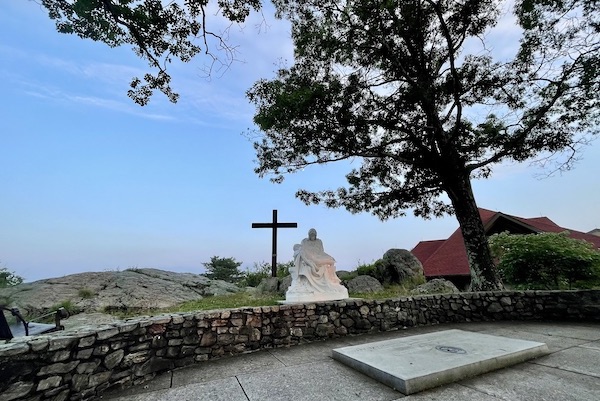 What grew and developed at Graymoor is nothing less than astonishing: set among the Catskills, there’s a massive enclave of chapels, residences (for both men and women), facilities to care for the sick (notably, the poor and homeless and those battling addiction) and more. 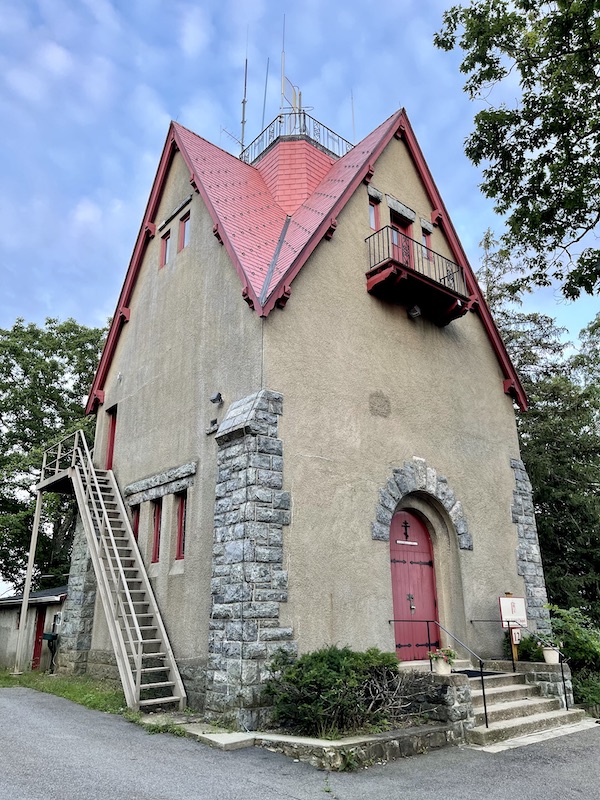 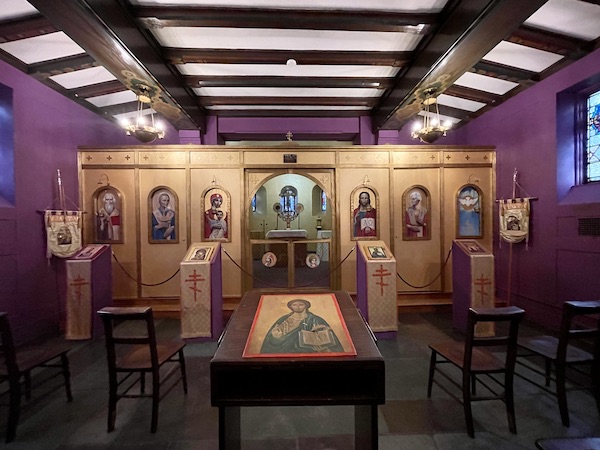 There’s a huge outdoor prayer site (dedicated to St. Anthony) where Masses can be celebrated; the site is still home to picnic areas, ball fields and hiking trails. 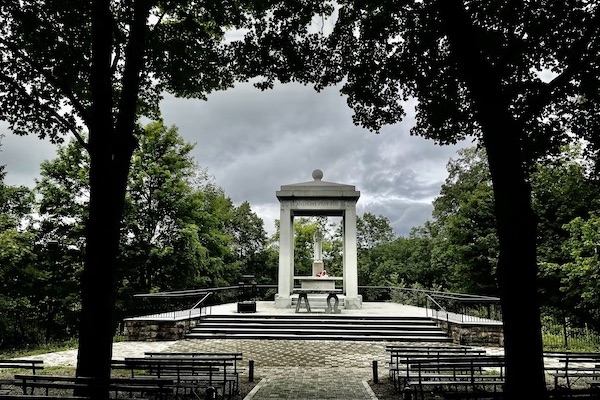 Back in the day, big busloads of pilgrims would travel up here from New York City for people to relax, visit, pray, and rub elbows with the friars. If you ask some of the religious who are still here how they found out about the place, they’ll tell you, “My parents used to bring us here when I was a kid.” At one time, the place was teeming with vocations (sisters, brothers and priests were all housed here at one time) but now it’s dwindled to just a handful, and most of the religious on the grounds are elderly or ailing.

It’s still a beautiful retreat destination — the setting and scenery alone makes it worth the trip.  And there’s a sense of serenity here that makes it seem like you are in another world — not just 50 miles from New York City! 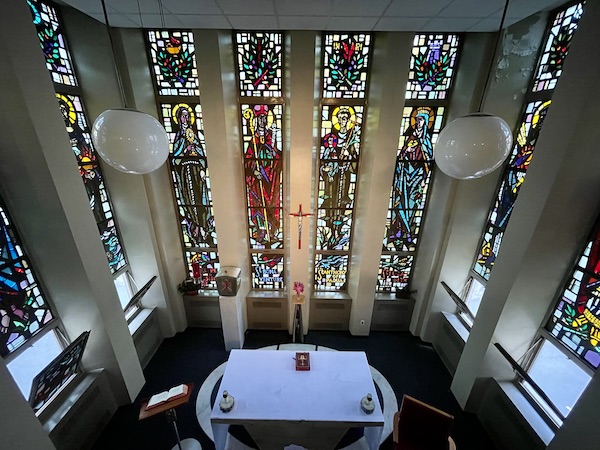 Chapel in the Spiritual Life Center

Aside from the ongoing work in ecumenism and working for Christianity unity, one of most enduring ministries here these days is offering memorial Masses for various causes and intentions. (Want a Mass said? Visit this site.)

You can read more about the friars, the sisters and their mission here.

Come by and visit sometime, for a day or a weekend. It’s absolutely worth the trip.

As an added bonus, if you stop by the St. Francis Chapel, you will see something extraordinary: a statue of St. Francis of Assisi whose face was reportedly molded from St. Francis’s death mask. There are only two of these statues in existence. The other one is in Assisi. 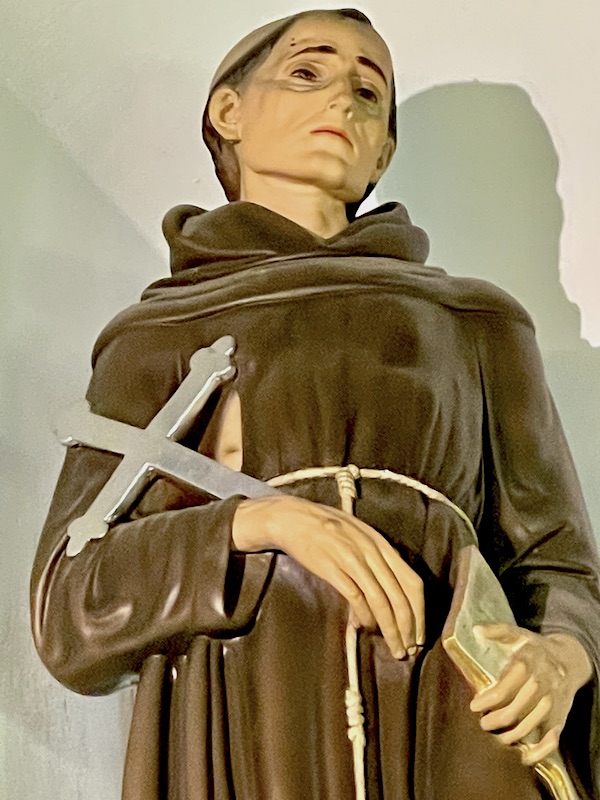