The Vatican today announced the happy news that Maria Cristina Cella Mocellin is on the path to sainthood. The pope today authorized several decrees concerning heroic virtues, which means Maria will be declared  a Venerable Servant of God.

Her life testifies not only to her own holiness, but to a young woman who displayed a trusting faith in God in our own time. She is also a profound witness to the sanctity of life.  She was a lay woman, a wife, a mother and a protector of the unborn.  She died in 1995. She was 26.

Maria Cristina Cella is born in Monza on August 18,1969 to Caterina Smaniotto and Giuseppe Cella. Hers is a simple, honest working family based on solid Christian principals. At a very early age Cristina begins to attend the family’s parish youth group (Oratory) at the Holy Family Parish in Cinisello.  She attends catechism classes taught by the Sisters of Charity of Saint Giovanna Antida under the direction of Sister Annarosa Pozzoli who provides her first basic formation to the Sacraments of the Catholic Church…

…During high school years a religious vocation seemed to be the future goal chosen by Maria Cristina.  She was attracted by the example given by the Sisters working in the Parish and expressed a desire to become a Sister of Charity in the future.  However a casual encounter with Carlo Mocellin of Valstagna in the province of Vicenza at the end of a summer vacation spent with her maternal grandparents upsets her plans and changes her mind towards her future.  Following long and serious interior discernment, Cristina decides to accept her engagement and consequently marriage as a rich and full way of carrying her towards her encounter with that God she so strongly desires in her heart.

At the age of 18 and only one year after becoming engaged to Carlo, Cristina experiences for the first time great and unexpected suffering.  A tumor on her left thigh appears upon her return from a vacation in Canada and forces a particularly hard ordeal on her between various hospitals.  Three cycles of chemotherapy  keep her from her studies and normal life for many months.  This experience of great suffering, cements her love for Carlo who has passed his time between hospitals in Veneto and Lombardy to be close to her the whole time.  It is during this experience that their love assumes an eternal aspect: the two swear to love each other forever and begin their plans for the future.  Cristina recovers completely and manages to complete her high school with high grades.  Her life suddenly accelerates.  The strong desire to marry Carlo leads to their marriage on February 2, 1991 when Cristina and Carlo celebrate their union before God.

Cristina begins her married live in Carpanè (province of Venice) Carlo’s hometown and continues her University studies (she is in her third year of Foreign Languages at the Catholic University of Milan).  Their first son, Francesco, is born ten months later and after only two and a half years Lucia is born.

These are years of serenity and joy for the young family experiencing a strong and extraordinarily rich love.  In the fall of 1993 and only a few months after the birth of Lucia, Cristina becomes pregnant with Riccardo.  Unfortunately the beginning of the pregnancy also coincides with the appearance of another tumor in the same leg treated five years previously.

After getting over the initial shock, Cristina and Carl begin an intense period of prayer both personal and as a couple.  The couple express their decision to the oncologist to safeguard the life of the baby that Cristina is carrying at any cost.  At this point, Cristina undergoes a localized operation to remove the tumor but does not begin chemotherapy so as not to endanger the life of the fetus.  Riccardo is born in July 1994—a completely healthy and lively baby boy.

Cristina’s battle now begins with her own physical illness.  Unfortunately the therapies do not have the same success as those of five years earlier.  Some metastasi have reached Cristina’s lungs and this is the beginning of  particularly intense physical suffering.  However it is also the beginning of complete abandon to God’s will and  putting all in the hands of the Father whom she always loved and tried to follow throughout her life.

On October 22, 1995 Cristina entered eternal life, leaving behind a profound message of love and faith in God which will be picked up by many people that knew and assisted her in this passage.  Saint Paul Editors published Cristina’s Spiritual Diary in 2005 entitled “A Life Donated” realized by Father Patrizio Garascia.

Venerable Maria Cristina, pray for us! 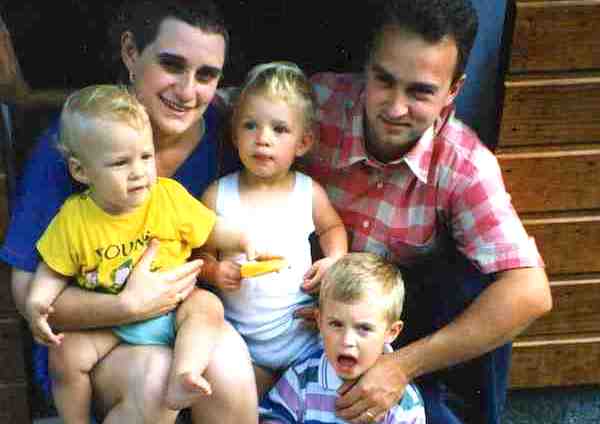