Pleas from members of the Loyola Marymount University community against Friday’s on-campus Planned Parenthood fundraiser have fallen on deaf ears with the Catholic university allowing the event to continue as scheduled.

LMU Women in Politics, the registered student organization at the university that is hosting the semiformal event, have doubled down on their decision throughout the week in the face of backlash from students and alumni. Meanwhile, the university has stayed largely mute.

Samantha Stephenson, a Loyola Marymount alumnus who organized a petition against the event, told Crux she was “heartbroken, sad, disappointed, and angry” after learning of the event.

“I know that if there were an event that was marginalizing to any other class of people who tend to be overlooked, forgotten, or exploited in some way then that event would not be permitted on campus,” Stephenson said. “For the unborn to be overlooked, it’s really disheartening.”

Stephenson, a Catholic writer and podcaster, noted that the type of event is part of the problem.

“It’s absolutely important that we have dialogue with people who believe different things and we make space for that in academic settings, but this is not one of those events,” Stephenson said. “This is not a freedom of speech issue. This is a fundraiser and there will not be a Planned Parenthood representative or any kind of dialogue.”

LMU Women in Politics describes itself as an organization “fighting for women’s equality on and off of campus.” It declined Crux request for comment. However, it posted a statement online thanking those that have supported the fundraiser, further claiming that “backlash from conservatives on and off campus … will not stop us from creating change and celebrating making history with all of you.”

CNA has a statement from the university:

The student group, Women in Politics, is hosting the fundraiser Nov. 5 in Roski Dining Hall. The club describes the event on an online university calendar as “an opportunity for us to raise money for a cause we really care about and have fun at the same time!”

In a statement, the university told CNA that it is neither sponsoring nor endorsing the event.

“The events, actions, or positions of student organizations, including Women in Politics, are not endorsed by the university,” the statement reads.

“However, the existence of these student organizations and their activities are living examples that LMU embraces its mission, commitments, and the complexities of free and honest discourse,” the statement adds. The university says that it “remains committed to its Catholic, Jesuit, and Marymount heritage, values, and intellectual traditions.” You can read the university’s full statement below. 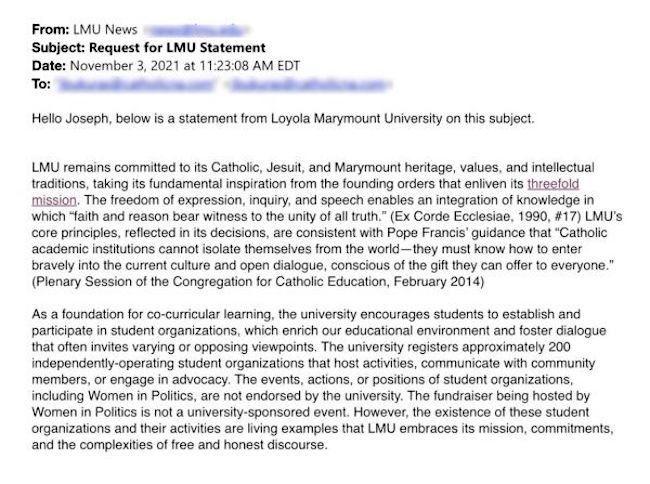