How’d they do that? Recreating Fatima for ‘Fatima’

An interesting behind-the-scenes piece from, of all places, Variety:

Director Marco Pontecorvo shot his film “Fátima” entirely on location in Portugal, not just for authenticity, but because the Portuguese government also created a special film incentive package, giving the production a tax credit.

The movie, released via PVOD and in theaters on Aug. 28, is based on historical events in 1917 when three young children reported seeing the Virgin Mary in the rural village of Fatima, Portugal while in the fields. The apparitions caused believers to flock to the site.

Set against a backdrop of World War I, Pontecorvo makes his English feature film debut in the retelling of the story. The former “Game of Thrones” cinematographer sought to find the right towns to film in. He relied on production designer Cristina Onori to transport viewers and the production to 1917. Together, they scouted around, settling on the towns of Tapada de Mafra, Coimbra, Tomar, Lisbon and Cidadelhe to serve as a backdrop.

Onori dug into archival photographs from the period before traveling to Portugal and began looking at bricks in local villages, the fields and churches envisioning her sets. 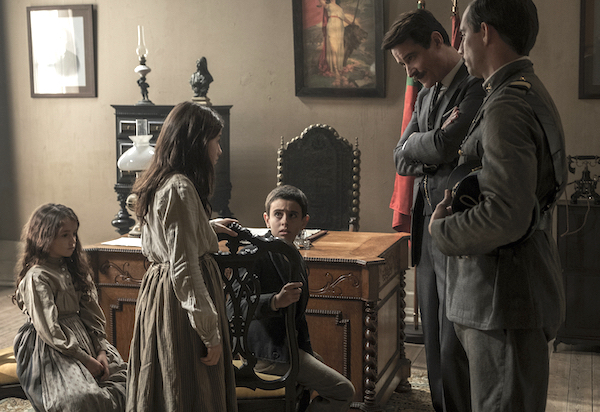 Cidadelhe, in Northeastern Portugal, served as the perfect location for Onori to build the farming village since so much of it had been untouched by modern construction. “I added in olive groves and wheat fields,” she says adding that she and Pontecorvo had traveled all over Portugal to find the right village. Even then she says, “it wasn’t easy at all. But Cidadelhe was like a ghost town and so many of the buildings and houses still existed.”

But there were still elements she needed to add in to make the landscape appear inhabited and real. “I had to add so much to the landscape,” Onori explains. And since some houses didn’t have roofing, Pontecorvo relied on VFX to finish out the location in post-production.

Another key set was Lucia’s house. With so much of the film focused on the 10-year-old who experiences the apparitions, finding the right house was imperative. In the end, the house was built on a soundstage in Portugal. “We had no room for the camera crew,” says Onori of other possibilities. With the soundstage, the crew could have the flexibility to open walls and move the set according to what Pontecorvo needed.

Check out the rest.