For Holy Saturday: ‘The Holy Virgin in Old Age’

A haunting image from one of my favorite artists, James Tissot.

Tissot was a French painter and illustrator. He was a successful painter of Paris society before moving to London in 1871. He became famous as a genre painter of fashionably dressed women shown in various scenes of everyday life. He also painted scenes and characters from the Bible.

… In 1885, Tissot had a revival of his Catholic faith, which led him to spend the rest of his life making paintings about Biblical events. To assist in his completion of biblical illustrations, Tissot traveled to the Middle East in 1886, 1889, and 1896 to make studies of the landscape and people. His series of 365 gouache (opaque watercolor) illustrations showing the life of Christ were shown to critical acclaim and enthusiastic audiences in Paris (1894–5), London (1896) and New York (1898–9), before being bought by the Brooklyn Museum in 1900. They were published in a French edition in 1896–7 and in an English one in 1897–8, bringing Tissot vast wealth and fame. During July 1894, Tissot was awarded the Légion d’honneur, France’s most prestigious medal.Tissot spent the last years of his life working on paintings of subjects from the Old Testament. Although he never completed the series, he exhibited 80 of these paintings in Paris in 1901 and engravings after them were published in 1904.

America published this appreciation of him a few years ago:

According to his own account, Tissot, at around age 48, saw a vision during Mass in the Church of St. Sulpice in Paris. Until that time his paintings had focused primarily on high-society life in Paris and London. After his mystical experience, Tissot’s work changed markedly. His next painting, “Inward Voices,” depicts his vision: an impoverished couple sit on the rubble of a building in ruins; beside them sits Jesus—scourged, bleeding and wearing a crown of thorns, yet present to comfort them. Tissot’s religious experience at St. Sulpice resulted in a lifelong directional shift in his artistic work. 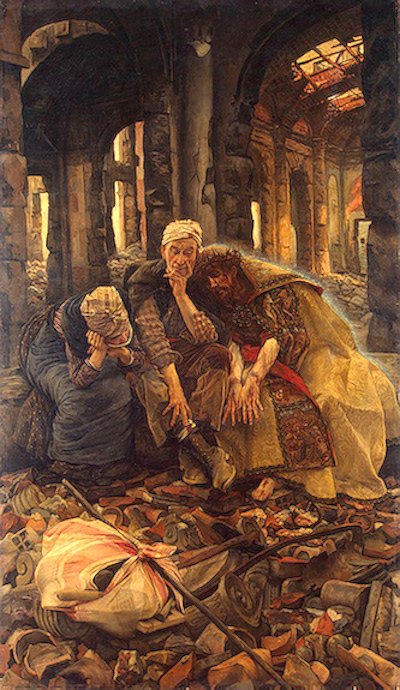 Like most conversions, Tissot’s was not instantaneous. Even before his conversion, he had painted several religious subjects that show his familiarity with the Christian saints. Around 1881, Tissot finished a series of oils and etchings of the parable of the prodigal son, setting each episode in the France of his day. The rich father lives in a chic riverside home; the prodigal spends his inheritance on an Asian fling (Paris was infatuated with Japanese culture at the time); the father and son reconcile on a crowded dock; and the celebratory family feast is served waterside, perhaps along the Seine.

Four years later, after his vision, Tissot undertook an artistic project that led him to study archeology and the Bible, and he traveled three times to the Middle East, where he filled sketchbooks with images of the people and places he observed. Drawing upon his photos, sketches and nearly 100 finished drawings, Tissot created a suite of 350 watercolors, entitled “The Life of Our Lord Jesus Christ,” commonly known as “The Life of Christ,” a chronology from Jesus’ birth to the Ascension. It took the artist 10 years to make these vivid, detailed and emotive images. Some are miniature masterpieces; only the major episodes in Jesus’ life are larger in size than a standard sheet of paper. The narrative work includes portraits and landscapes, aerial views and close-ups, intimate moments and vast crowd scenes.

Contemporaries of Tissot, like Paul Gauguin and Vincent van Gogh, also produced biblical images, as did Maurice Denis decades later. But by the end of the first half of the 20th century, only Georges Rouault and Marc Chagall had come even close to Tissot in the quantity of their Bible-based output.