A church rises in South Carolina: ‘We wanted something transcendent’

Last year, I posted about a remarkable building project in South Carolina, to erect a new parish church in the Diocese of Charleston.

When the church was first conceived to be built near Bishop England High School in 2015, the concept included 16 massive stained-glass windows.

But as its development began to unfold on the drafting table, the number of windows was pared down to 12 and reality set in that the church could not afford the elaborate window treatments. Planners decided on plain glass until enough money was available at a later date to replace them with the more colorful and picturesque versions.

As the church’s design began to take shape on paper, church leaders learned of a 300-bed convent in Pittsburgh where the membership had fallen off. The convent, built in 1897 as the home to the Sisters of St. Francis of the Neumann Communities, was designated to be sold and the chapel furnishings were to be auctioned off.

It just so happened that inside the chapel were 12 stained-glass windows designed by renowned German window maker Franz Mayer of Munich. They also were almost exactly the right size to fit the 18-foot-tall by 8-foot-wide windows of the proposed new church on Daniel Island.

The church paid about $450,000 for the windows and their removal, according to the Rev. Gregory West, pastor of St. Clare of Assisi. New ones would have cost many times more than that, he said.

Two of the windows depict St. Clare. All of them are now in storage in Pittsburgh. Workers will begin to place them in the new church in August 2022, according to John Edward Griffith, project manager at Trident Construction.

Other items purchased from the Pittsburgh convent include a marble altar, a marble baptism font and statues of St. Joseph, the Blessed Mother and St. Clare.

The new church will also feature the chapel’s reredos and main altar. And the inspiration for the design? 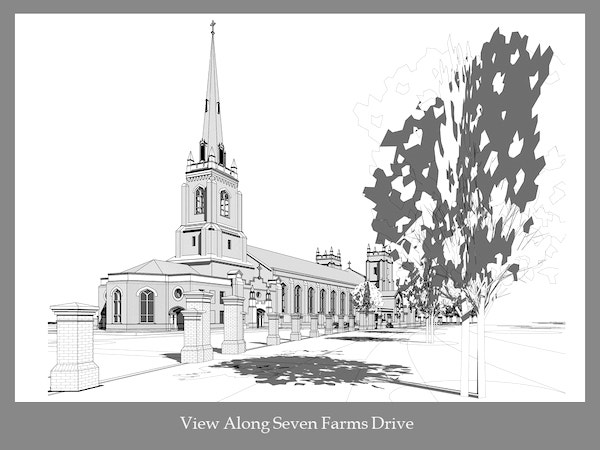