The Pope was shot and wounded by Mehmet Ali Ağca while he was entering the square. The Pope was struck four times and suffered severe blood loss. Ağca was apprehended immediately and later sentenced to life in prison by an Italian court. The Pope later forgave Ağca for the assassination attempt. He was pardoned by Italian president Carlo Azeglio Ciampi at the Pope’s request and was deported to Turkey in June 2000.

The plaque below marks the spot. Many people walk by and don’t even realize it. 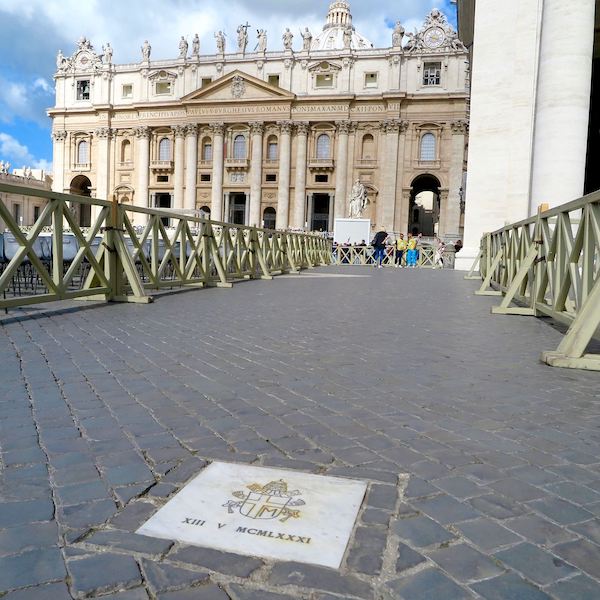 Below is how CBS News covered this event.

Following the shooting, Pope John Paul II asked people to “pray for my brother [Ağca] … whom I have sincerely forgiven.”In 1983, he and Ağca met and spoke privately at Rome’s Rebibbia Prison, where Ağca was being held. Ağca reportedly kissed the Pope’s ring at the conclusion of their visit; some mistakenly thought the Pope was hearing Agca’s confession. The Pope was also in touch with Ağca’s family over the years, meeting his mother in 1987 and his brother, Muezzin Agca, a decade later.

Although Ağca was quoted as saying that “to me [the Pope] was the incarnation of all that is capitalism”, and attempted to murder him, Ağca developed a friendship with the pontiff. In early February 2005, during the Pope’s illness, Ağca sent a letter to the Pope wishing him well. 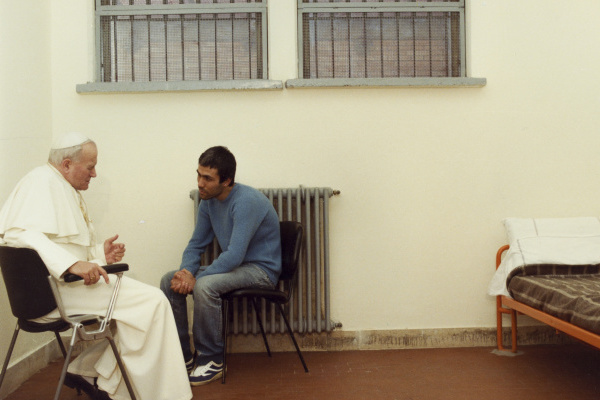 Pope John Paul II would go on to make mercy a hallmark of his papacy — and his promulgation of the Feast of Divine Mercy remains part of his enduring legacy.

In 1997, he visited the Shrine of Divine Mercy in Lagiewniki, Poland. Outside of Krakow, Poland, where the relics of St. Faustina are kept, John Paul II addressed the Sisters of Our Lady of Mercy — and, really, addressed the world:

An extraordinary vocation is yours. Choosing from among you Blessed Faustina, Christ has made your congregation the guardian of this place, and at the same time he has called you to a particular apostolate, that of His mercy. I ask you: accept this responsibility!

Do not neglect any of these dimensions of the apostolate.

St. John Paul, pray for us!